Scott strikes at suspended US PGA

Adam Scott is one behind leaders, Rory McIIroy and Vijay Singh, when the third round of the US PGA Championship was suspended due to heavy thunderstorms.

Scott had his round going to be 4-under-par through nine when a storm warning halted play as dark, threatening clouds approached the Ocean Course at Kiawah Island Golf Resort. 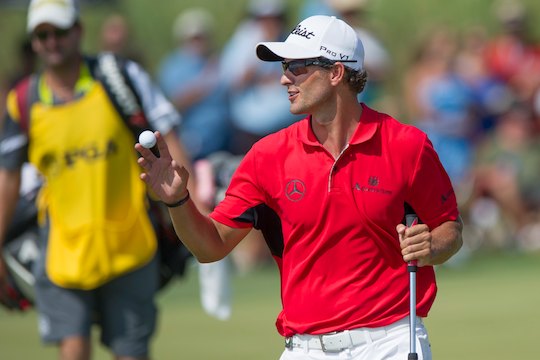 Adam Scott reacts to his birdie during the third round of the US PGA Championship (Photo: Anthony Powter)

The timing of the suspension in play could not have come at a worse time for Scott, having made three consecutive birdies through seven, eight and nine as he strives to win his first major and put to rest the critics after last month’s Open Championship at Royal Lytham.

The third round will resume on Sunday at 7.30am, with the final round being played in groups of three from split tees starting at 11.44 am.

A confident McIlroy had five birdies in his opening eight holes for the outright lead but bogeyed the ninth to slip back to six-under for the tournament.

Tiger Woods, who began the day at four-under, bogeyed the fourth, fifth and seventh holes before the delay, undoing much of the good work he did with Friday’s impressive 1-under-par, 71. 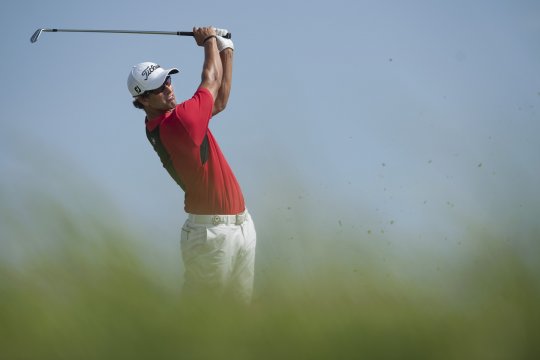 Adam Scott nails his tee shot on the 7th to be a stroke behind the leaders when play at the USPGA was suspended due to weather. (Photo: Anthony Powter)

It was the second Saturday in the last three majors that Woods has gone backward on the opening nine holes.

After taking a share of the lead into the third round at this year’s US Open at the Olympic Club in San Francisco, Woods made bogeys on four of his first eight holes and shot a 5-over-par 75. He tied for 21st the next day.

Aaron Baddeley, Scott’s third round playing partner, is currently even for his round and in a share of 11th position.

Geoff Ogivly was fortunate to get his third round in, carding a 2-under-par 70 to be currently in a tie for 19th position.

Marc Leishman fired a third round 71 to be at 1-over-par for the championship and in a tie for 21st.

Greg Chalmers is at 2-over-par with John Senden at 3-over-par with the Aussies having early tee times and being able to complete their round.