Houston, Texas: Defending Masters Champion Adam Scott has surprised all but a few including the injured Tiger Woods with his main menu choice at next Tuesday’s Augusta Former Champions Dinner – ‘Moreton Bay Bugs’.

A Moreton Bay Bug is a flat-headed lobster and gets its name from the body of water along the east coast of Australia bordering the city of Brisbane and close to where Scott grew up. 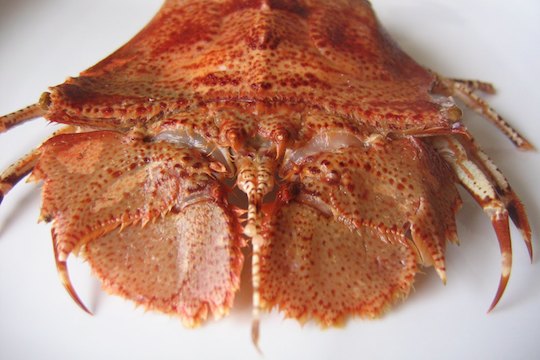 The now annual Former Champions dinner was first held in 1952 at the suggestion of Ben Hogan.

Scott last year became the first Australian in the Masters 79-year history to be fitted with a green jacket.

And while the current World No. 2 wished to keep the full menu close to his chest he revealed he has arranged for some three dozen ‘Bugs’ to be flown over from Australia for the dinner where he’s expecting some 32 former champions, along with Augusta National Chairman, Billy Payne to be in attendance.

The only doubtful guest is Woods and a four-time past August National champion but then given the American has ruled himself out injured it seems unlikely the 14-time Major Champion will be present at the dinner.

An array of former Masters winner’s were quizzed: “When you sit down to the Former Champions Dinner and saw ‘Moreton Bay Bugs’ on Adam Scott’s prepared menu would you know what they were?”

But it was only Woods, who has traveled to Australia often over the past years and including capturing the 2009 Australian Masters, who didn’t hesitate in responding: “Lobster”.

The World No. 1 surprised many former champions in 1998 when the then 22-year old served-up cheeseburgers, chicken sandwiches, French fries and milkshakes.

“There is always a choice because you can order off two menus. One menu the former champion offers you or you can choose from the set Augusta clubhouse menu,” said Woods recently.

“I wasn’t there in 1989 but I remember Sandy Lyle served-up haggis but then I don’t know how many guys ate the haggis but then Charl (Schwartzel) had a selection of South African beef dishes when he hosted the dinner and that was fabulous.”

Here is the reaction from those who will be present at next Tuesday’s dinner.

“No, never heard of them. But then one of my favourite things about attending the Former Champions dinner is we always get a flavour as we saw when Angel Cabrera won and with the likes of the South Africans Trevor Immelman and Charl Schwartzel”.

“I’ve never heard of them but if I would take a guess I’d say they are a shrimp or a prawn. So it’s a lobster? Does it have a bit tail? That sounds like it should be good.”

“When I hosted the dinner I chose South African dishes called Bobotie. It is like a curried ground beef and it’s got onions with kind of a layer of egg on top and rice.”

“I had all South African wines from my own town, so everything went superb and there was no stress. We actually ran a contest through local newspapers back home in S.A. asking people what they thought I should serve.”

“It was also a cold windy night back then 2009 and everyone ate off the menu, and given it was so cold a lot went back for seconds”.

“Moreton Bay what? Bugs? I have no idea. Moreton Bay Bugs. Gee whiz! If you are talking to him tell him spiders would taste a lot better than bugs.”

“I said to Scotty to surprise us but he looks like he will. When I hosted the dinner in 2012 it was important you serve something that 90% of the guys will eat.”

“There is nothing worst when you go to so much trouble and most of the guys wont’ touch it and then turn to eat of the menu.”

“But now knowing it is lobster I am sure most guys will like lobster.”

“They have to be some kind of bug but I haven’t the slightest idea. But then I can’t wait to try them as in congratulating him I said to Adam that I don’t care what you choose, I just want to be surprised. I love Aussie food so I’m looking forward to the dinner.”

“It’s really important to get the menu right as I had a chef who grew up in the same Canadian town as me, and he put it all together. I had Elk, potatoes from east Canada along from berries from mid-Canada, Canadian wine so it was an all-Canadian affair”.

“I’ve been to Australia a few times but I have not the slightest idea what they are. There are guys who will attend the dinner will order from Scotty’s menu but then there are those who are pretty simple guys and they will take something off the club’s menu like chicken or steak rather than experiment. I chose Mexican food and the choice was welcome.

“It must be some seafood I guess and hooray, I got it right. It is easier now to prepare a menu than the older days as most of the players at the dinner have played around the world.”

“Also Augusta was more strict in the past as to what you could have on the menu but they have since opened the door.”

“I am going to guess it is a crawfish. I remember being on a cruise and there was a restaurant called ‘Jacques by the Sea’ and I think they were on the menu.”

”I have been to Australia so many times in my career, and I miss Oz terrible so much, but I can honestly say I have never eaten a Moreton Bay Bug. Now what are they? I remember the dinner I hosted and I was this little South African lad and I thought to myself what would they like most.”

“I knew they wanted steak and a baked potato, and a shrimp cocktail so I ordered it. But I wouldn’t mind a Moreton Bay Bug as anything from Oz would be great with me.”