Adam Scott will take a four stroke lead into the final round of the Australian Masters at The Royal Melbourne Golf Club.

Scott fired a third round 66 with three time Major winner Vijay Singh carding the day’s low round of 8-under-par, 63 to move into a share of second alongside Nick Cullen, Matthew Griffin and Nathan Holman. 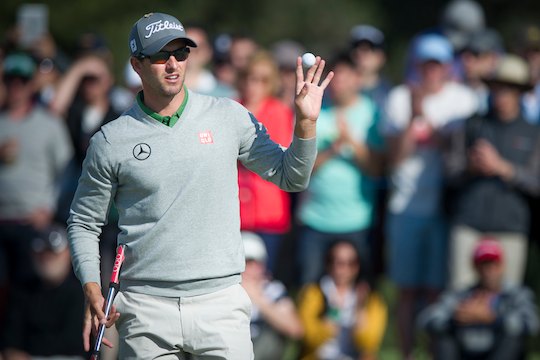 Adam Scott will take a four stroke lead into the final round of the Australian Masters at Royal Melbourne (Credit: Anthony Powter)

Over his last three rounds, Scott has carded seventeen birdies and played the challenging par 4′s at seven under. The Royal Melbourne layout continues to provide a stern test, yet providing reward for quality shot making.

“This course does not favour any player,” said Scott. “There’s a good score out there and hopefully I will have one tomorrow.”

In contrast to yesterday’s 66, Scott managed to hit eleven of fifteen fairways but made 29 putts to keep his round in check.

The US Masters champion briefly slipped up, three-putting twice in succession for bogeys on the 11th and 12th holes to slip back to 12 under.

Immediately after the round Scott headed to the range to continue to work on his swing.

“I wanted to keep the momentum going and head into tomorrow with some positive thoughts,” said Scott.

“I hit some great approach shots out there today, made mistakes on 11 and 12, but overall it was a good round and it puts me in a good position for tomorrow.”

“It is about not wasting any shots and taking advantage of the goods ones,” said Scott.

Holman, who was paired with Scott, played stellar golf under the circumstances carding a 1-under-par 70.

Despite the pressure of playing alongside Australia’s first Masters champion, the rookie 22-year-old stepped up to the plate by opening with a three birdies in the first four holes.

Overall it was an impressive performance for Holman and tomorrow he will likely be paired with Matt Griffin.

Griffin knows Royal Melbourne as well as anyone. He lives just around the corner and as an amateur honed his ball striking on Melbourne’s famed sand belt. He will be looking at collecting his maiden Australian Tour title tomorrow.

American Matt Kuchar is five behind Scott, a difference which will be problematic to reduce given the form Scott is exhibiting.

Scott appears to be on the verge of back-to-back victories after his sensational win last week at the Australian PGA on the Gold Coast.