Adam Scott protected his position on top of The Open Championship with a third round 68 as the Australian goes in search of his first major title with a four-shot lead over Northern Irishman Graeme McDowell.

McDowell steadily pushed his way up the leaderboard with a 3-under par 67 to be tied with Brandt Snedeker at 7-under-par. 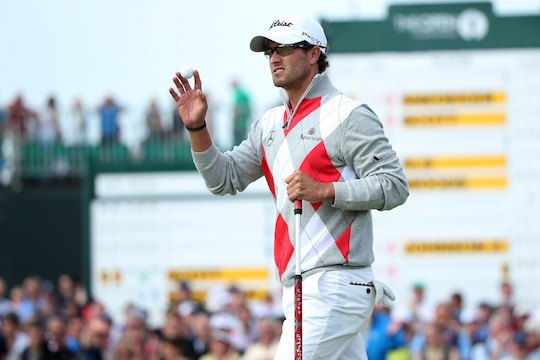 Adam Scott waves to the gallery during the third round of The Open Championship at Royal Lytham & St. Annes (Photo by Andrew Redington/Getty Images)

Tiger Woods is a further shot back at 6-under-par, five strokes from Scott.

Scott didn’t go low during the third round – hardly anyone did, despite the perfect conditions – but his 68 left him well clear of the field on a day when no one beat Zach Johnson’s 66. Last week’s John Deere Classic winner, Johnson, sits in equal fifth place alongside Ernie Els.

Scott is showing every sign of closing in on his first major – hitting quality shots and holing plenty of putts.

His putting has been flawless, yet the Aussie remains cautious heading into the final day.

“Well, a four-shot lead doesn’t seem to be very much this year on any tournament I’ve watched,” said Scott.

“The good part is, if I play a solid round of golf tomorrow, it will be very hard for the others to beat me.”

McDowell, with a US Open under his belt and a near miss for another at the Olympic Club last month, has become a golfer to watch on the weekend at majors.

Despite being four behind Scott, McDowell is every bit as dangerous and capable as Scott.

“I guess in a way it will be in Adam’s hands tomorrow if the conditions are as straightforward as they have been,” said the Northern Irishman.

“Throw a bit of wind across this course like they are forecasting, and he’ll have to go and work a lot harder for it. He’s going to be a hard man to catch, but I’m happy to be looking the guy in the eye, and it will be a great battle.”

Both will have to keep an eye on Woods, who had an even-par 70 Saturday in another frustrating day at the office.

Woods is five back and will be in the group ahead looking for his 15th major and his first since 2008.

Following bogeys at the first and third holes, spectators seemed deflated and Woods appeared angry with himself over the missed opportunities.

“I fought back and just didn’t get anything going on that back nine,” said Woods.

“I thought I had a couple of good looks at some putts and didn’t make them and misread the putt there at fifteen.”

“I got off to an awful start and battled back and got myself right back in the mix again going into tomorrow, and I’m right there.”

It’s the fourth time in the last nine majors that a player has a four-shot lead with one round to go. Rory McIlroy at the 2011 Masters is the only player who didn’t win from that position.

Scott has been so steady all week that he has put himself in position to become only the fourth Open champion with all rounds in the 60s.

“I was kind of saying yesterday in here that I think when I’m in the lead I’m playing well,” said Scott.

“I just need to do all the same stuff I’ve been doing that’s been effective, and it shouldn’t really change just because it’s Sunday.”

“Obviously there’s nerves and there’s a finish line out there somewhere. But throughout my career somehow I have been able to handle that situation fairly well most of the time.”

Scott has never had a better chance to end his long wait for a major – and he owes much of that to his long putter and the manner in which he has composed himself this week at Lytham with a sharp game and solid putting – which so far has seen the belly-putter finding the mark.

During today’s third round, Scott stayed in the game early with two key par saves, pulled away with three birdies around the turn and was solid at the end to set up for Sunday and his chance to create some history.

“I’m just happy to be in this position,” Scott said.

“To be honest, I’m really excited about tomorrow.”