Scott welcomes baby boy, heads to US for FedExCup

Just ask Adam Scott, whose recent professional sacrifice might see him surrender any chance he had at winning the FedExCup Series. 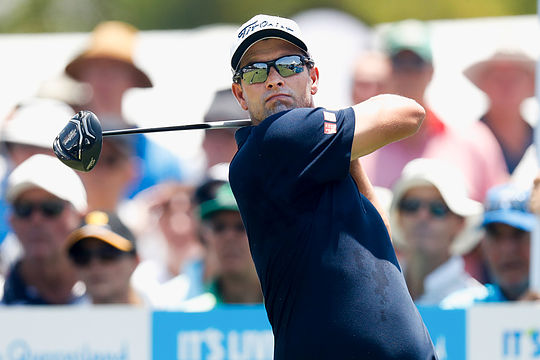 Although I doubt the popular Queenslander would have too many regrets.

Scott and his Swedish architect wife Marie Kojzar welcomed a new addition to their household recently with the arrival of new baby boy Byron, the couple’s second child alongside two-year-old sister, Bo Vera.

The couple had been expecting the newborn on August 19, a due date that had forced Scott to pull out of the first FedEx Cup playoff event, The Northern Trust.

It was a decision that didn’t come lightly for Scott, who sat in 66th spot in the FedEx Cup standings before last weekend’s event, won by world No 1 Dustin Johnson.

With only the top 70 advancing to the third event, the BMW Championship, the Aussie ran the risk of dropping out of playoff contention altogether.

Yet Scott knew full well that a consequence of his absence could mean he won’t compete again until the President’s Cup in October…although even that appeared a small price to pay for the 37-year-old, who got to welcome baby Byron into the world in person.

It won’t be something to dwell on.

Australia’s only US Masters champion, Scott still has a few good years of golf left ahead of him.

And with the birth of his new baby boy to potentially carry on his legacy, the Scott name might continue to grab headlines for a few more decades yet!

Despite earlier indications, Scott has now indicated he will make his way back to the US to play in the second round of the FedExCup at this week’s Dell Technologies Championship in Boston so that 10 million-dollar first prize isn’t completely out of reach just yet.