Scott’s confidence high ahead of Masters

Adam Scott showed up at Augusta on Sunday with the long putter in his bag.

The anchored stroke Scott has primarily used over the past four years will be banned from January 1 next year and while Scott played his past three tournaments with a short putter, the 34-year-old will revert to his broomstick this week in pursuit of his second Masters title. 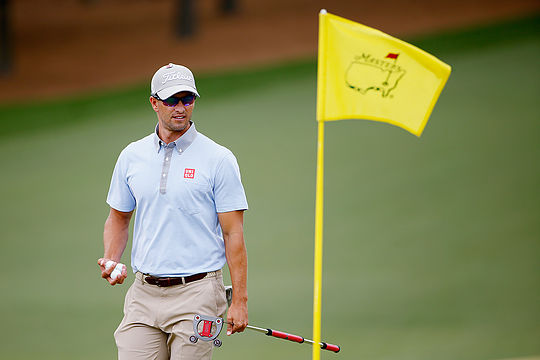 Adam Scott practices ahead of the 2015 Masters (Credit: Getty Images)

“It just seemed like the sensible thing to do,” Scott said. “I’m not here to just see what happens. I’m here to get the job done, and the odds are more in my favour of doing that with the longer putter considering I’ve used it the last four years.”

It was, after all, his putting, which in the past has come under close scrutiny, which delivered the winning result in 2013 when Scott made a 20-foot birdie putt on the 18th hole that ultimately got him into a playoff with Angel Cabrera. He then sank a 12-foot birdie putt on the second extra hole to become the first Australian to win the green jacket.

Before Scott collected our first ever Masters title, Australians had been runners-up at the Masters on eight occasions, including four years ago when Scott and Jason Day shared second after Charl Schwartzel’s unprecedented birdie-birdie-birdie-birdie finish.

Most infamously, Nick Faldo hunted down Greg Norman’s six-stroke final-round advantage in 1996 to steal victory and Larry Mize miraculous green-side chip in a playoff with the Shark in 1987.

A year earlier and it was the great Jack Nicklaus collecting his sixth Masters title at the expense of Norman. In 1980, Jack Newton also had a runner-up finish to Seve Ballesteros.

Scott spearheads the Australian contingent this week at Augusta along with Jason Day, Geoff Ogilvy, John Senden and amateur Anthony Murdaca. Marc Leishman is still yet to confirm his place as he spends time with his sick wife in hospital.

“Over the past five years I’ve developed such a good feeling of playing Augusta that I feel extremely comfortable around there,” said Scott.

This year Scott can focus solely on winning his second green jacket, with last year having to deal with the spotlight of being the defending champion.

“I tried to enjoy it all. You only go back to defend your first Masters win once,” said Scott, who finished 14th in the defence of his title.

Winning majors is what Scott focuses upon, with his tour schedule clearly showing this having played just four events this year on the PGA Tour. Scott currently sits 116th in the FedEx Cup rankings and has dropped to number 6th in the world.

Yet with his old faithful putter back in the bag, Scott’s confidence is certainly there and he feels his preparation for the year’s first major is on track.

“I feel it’s my time to win big events. I feel I’ve put in all the work I need to over the past few years and I just have to go out and do it.”