Perth’s Jason Scrivener has returned home to Perth, Australia breathing a huge sigh of relief after managing to retain his European Tour card for the 2017 season.

The Mandurah Golf Club attached Scrivener superbly birdied his closing two holes in a second straight score of 67 for a 16-under par tally and a share of 17th place in Sunday’s concluding Portugal Masters at Vilamoura. 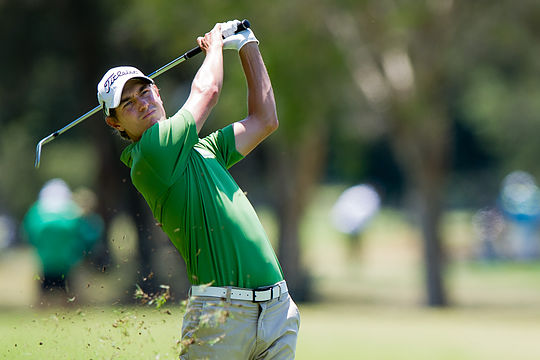 In his first full season on the European Tour, the South African-born Scrivener began the week sitting outside the top-110 on the Race to Dubai but managed to retain his card by ending the regular season 106th on the money list following his 17th place finish.

The former Australian Junior champion (2007) had secured 2016 Tour membership after finishing 7th a year ago at the European Tour Q-School however his maiden season competing on the world’s second biggest tour was not all plain sailing.

Indeed, Scrivener got off to a great start making the halfway cut in 10 of 11 events with a best finish of 3rd coming at the ISPS Handa Perth International.

But upon arrival on European soil he managed to make the cut in just four of the next 13 events, and Scrivener’s best finish among those events was his finish in Portugal.

Little wonder the surf-loving Scrivener was delighted to catch the one wave that mattered last week on the Oceanico Victoria course laid out close to the Atlantic Ocean shoreline.

“I am really happy with the way I played and happy to have a job next year,” he said. “It was nice to finish birdie, birdie as I was trying to play solid and I managed to play really well all day.”

“I just didn’t hole too many putts until the last two holes. But happy with my round.”

There is now sure to be a spring in Scrivener’s step when he tees-up on the Australasian Tour knowing that he has retained his European Tour card for 2017.

“The more times I can be under pressure and perform well, it’s good,” he said. “After the up-and-down year it’s been, highs and lows, but happy to go through.”

“I just love playing in Europe and I should be able to plan a schedule. Haven’t had that opportunity the last few years, so looking forward to that.”