Ireland’s Seamus Power won the Barbasol Championship on Sunday for his first PGA Tour victory, beating J.T. Poston with a tap-in par on the sixth hole of a playoff.

A 5-under 67 final round handed Power the clubhouse lead on 21 under before it was matched by Poston to force the playoff.

Earlier Poston looked on course for victory but a double-bogey on the 15th hole followed by a three-putt bogey on the next hole saw him throw away a three shot lead on the back nine.

Poston, seeking his second PGA Tour victory, played well enough on the first five playoff holes, including holing a birdie putt on the first extra hole, the 18th, after Power had chipped in for birdie. 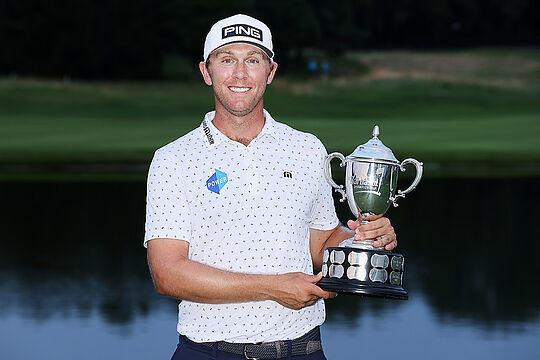 But playing the 18th again on the sixth extra hole, he hit his tee shot into water right of the fairway, took a drop and hit his third shot into rough right of the green where he was unable to get up and down for par.

Power might not have played the Open Championship but instead with Sunday’s win secured his PGA Tour card, as well as a spot in the playoffs and starts next year in the PGA Championship, The Players and the Tournament of Champions.

The victory comes in his 106th PGA Tour start, ten years after turning professional and five years after he first secured his PGA Tour card via the second tier Korn Ferry Tour.

His graduation from the-then Web.com Tour to the PGA Tour in 2016 was the culmination of a 10-year journey from the amateur ranks and the US collegiate systems at East Tennessee State.

“I view myself as extremely lucky,” Power said. “I’m 34 and I’ve yet to work a day in my life. So every time I get to play a tournament or play an extra year on tour, to me it’s a massive bonus. I love playing golf, it’s my favourite thing to do.”

Power came into the tournament with confidence and some momentum, having secured a string of top-10 finishes since May including tied 8th results at the Rocket Mortgage Classic and the John Deere Classic.

“My game has been very good since February. In February and March my game was probably in the best spot in my life.”

He moves to 67th on the FedEx Cup rankings and to 113th on the world rankings.

Greg Chalmers finished the best of the Australians in a share of 31st position followed by Cameron Percy in a share of 42nd position to round out the Aussies making the weekend.