The duo along with fellow Australian Scott Gardiner remained after their rounds to watch the 30-year old Bowditch break through to claim victory on the TPC San Antonio course and in his 110th Tour event. 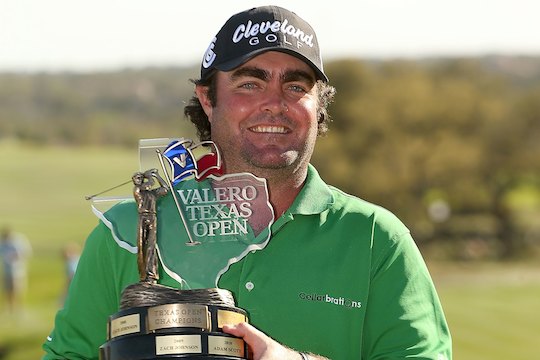 However there was plenty of anxious moments for those watching on, including Bowditch’s Dallas-born wife before Bowditch lipped-out for his par on the 18th and win with a final round 76 for a one shot victory at eight under par.

It is the highest round by a winner since Fijian Vijay Singh shot a similar last day 76 to win the 2004 PGA Championship at Whistling Straits in Wisconsin.

The American duo of Will McKenzie (70) and Daniel Summerhays (71) were tied in second place on seven under par and with their compatriot Matt Kuchar, and who was expected to make a final round charge, shooting a disappointing 75 to share fourth spot on six under par.

The double PGA Tour winning Senden, who shot a last day 73 to share 42nd place, was beside the 18th green casually dressed in jeans and a 2012 Master t-shirt and after congratulating Bowditch’s wife, he then embraced Bowditch.

“I just reminded ‘Bowdo’ he once caddied for me in the Jack Newton Celebrity Classic, so he’s come a long way since then,” said Senden smiling in an exclusive interview with www.golfbytourmiss.com

“This win is going to be huge for him and it’s been a big stepping-stone to get it done today, and it’s probably been the toughest day of his golfing life because of the situation he was in.”

“But then in saying that it is also the best day of his career, as well.”

“There was so much on the line today what with trying to win a first PGA Tour event, a first-ever appearance at Augusta and just the overall reward and security a win out here brings.”

“So it’s a real feather in his cap and look at the doors that will open for ‘Bowdo’. There’s the Masters, WGC events and also winning still this early in a season.”

“But then ‘Bowdo’s’ always been a serious talent but it’s just taken this long for him to break through. Of course, he’s won before but to win on the PGA Tour is huge, just huge.”

Baddeley had been in contention on day one with a round of 70 but faded over the weekend with scores of 79 and 76 to finish T67th.

However the triple winning PGA player was not about to miss out on witnessing Bowditch break his PGA Tour victory drought.

“To win your first tournament out here is such a big break through and getting over the line is like you can say to yourself ‘I can do it’,” said Baddeley.

“I remember ‘Bowdo’ back in the 2000 Aussie Open when he played in the second last group with the Shark when he was only 16 or 17, so I have remembered his talent since then.”

“So it’s just great to be here and congratulate him on his win. I recall the emotions I went through when I won for a first time and it would have been the same for ‘Bowdo’ as he’s a young family, so it’s just fantastic.”

“It wasn’t easy out there today so to record his first PGA Tour win was very impressive.”

“And it’s not just the exemption and the prize money that counts but he now gets into all the bigger events such as the Masters, Akron and then he’s got the FedEx Cup to look forward to as well as Hawaii at the start of next year.”

“So the great thing is that he can plan his schedule.”

“It’s been a great run of late for the Aussie golfers and hopefully myself and others can continue the winning trend next week in Houston.”