John Senden turned 40 this year but still feels that his best golf is ahead of him.

The 2006 Australian Open champion is determined to add his name to the Stonehaven Cup for a second time. 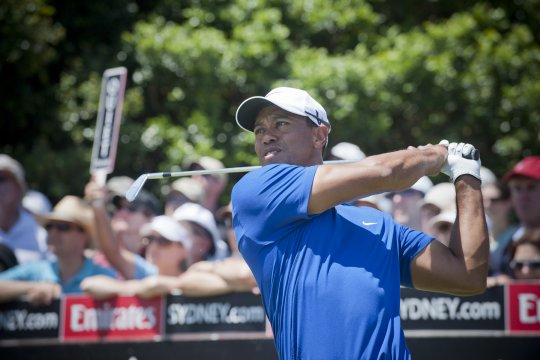 Tiger Woods follows his tee shot on the 4th during the third round of the Australian Open in Sydney, Photo: Anthony Powter

Senden cruised up the leaderboard to reach 12-under following today’s third round at The Lakes. His round included a chip-in eagle at the par four 6th and then another seven birdies on his way to carding a brilliant 63.

His nine-under-par round gave him a one stroke lead over fellow Queenslander Jason Day.

“There’s a long way to go. Shooting nine-under is something you don’t do very often so you’ve got to take it when you get it.”

Senden has recorded four top-10s on the US Tour this season on his way to accumulating US$2.3 million in prize money.

“I was playing solid and coming in here with momentum helps me.”

Jason Day celebrated his 24th birthday today and adding the Australian Open to his collection would be more reason to party.

“I really do want to win one, really bad,” said Day, who is the only player in the field to shoot three rounds in the 60′s.

“I grew up watching the Australian Open and it’s always been on my long term goal list. I’m in a good position for tomorrow to hopefully check that one off.”

Tiger Woods had waited 11 months to find himself in the lead at a golf tournament and yet it took him just three holes to lose it today.

Three consecutive opening bogeys and a putter that was misbehaving resulted in Woods carding a 3-over-par, 75 – slipping from a one shot lead to six shots behind John Senden.

“I just got off to an awful start,” Woods said.

“It was frustrating because I didn’t think the greens were going to be that firm but they were and instinctively when they’re that firm I play more break.”

Despite being six from the lead, Woods isn’t counting himself out just yet.

“If I can play a good solid front nine and get some momentum going well, there’s some easy holes on the back nine. Guys have been shooting between three and five-under on the back nine. If I shoot one of those scores, I’d be right there.”

Behind the leading pair, 1998 winner Greg Chalmers was proving Woods’ point about the par-fives by taking advantage of all four amongst his seven birdies. Chalmers is at 10-under-par, two from Senden.

Nick O’Hern also birdied five out of seven to stay in contention and capitalised with an eagle-birdie finish to move to nine under for the tournament and be three behind Senden.

With 14 players inside the top 10 and half of those within six shots of the lead, it is still anyone’s title tomorrow.