It is a case of Queensland continuing to rule this year’s PGA Tour with John Senden and defending Masters champion Adam Scott inside the top-three heading to the third round at Augusta National.

Senden, and winner of the recent Valspar Championship, posted six birdies in a round of 68 to move into second place at four under par and just three behind former Masters champion Bubba Watson. 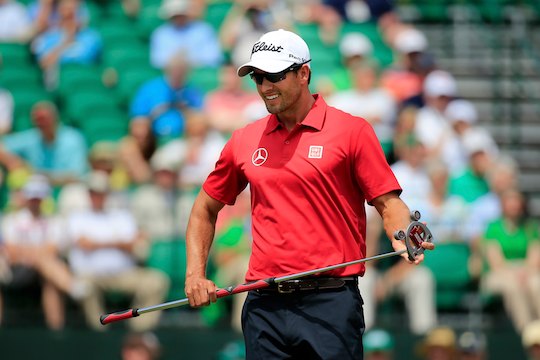 Adam Scott closed the second round of the 2014 Masters Tournament in equal third after a rollercoaster round of 72 (Credit: Rob Carr/Getty Images)

The 2012 Augusta winning hero birdied five holes in succession from his 12th, and despite dropping a shot at the last, his round of 68 was good enough for a seven under par 36-hole leading tally.

But while Watson looks to be fitted with a second green jacket history is against the Bagdad-born player who has led eight times before after the opening two rounds of a PGA Tour counting event, but only managed to close out one and that being 2011 Zurich Classic of New Orleans.

Senden and Scott find themselves on back-to-back pages in the official 2014 Masters Players Guide but with the 42-year Senden ending the round just one ahead of the fellow Queenslander.

Senden’s opening 36-hole effort is easily his best in twelve prior Masters showings including when he was lying seventh after two days a year ago.

“And if I keep believing in myself and enjoying it, that’s the difference when you’re under the pressure, if you can keep a smile on your face.”

And after the confidence boost of his recent victory at Tampa Bay, and Senden’s second on the PGA Tour, Senden is quietly confident of achieving what a year ago was totally unimaginable, and that is becoming the second Australian to be fitted with an Augusta National members green jacket.

“All I can do is stick to the game plan, and that’s doing my job well,” he said.

“It’s just about how you play the game. And I think that’s why we’re at the top. We can deal with it.”

And while Senden emerged as a possible new Masters champion Scott kept alive his hope of becoming only the fifth player in Masters history to successfully defend at Augusta National.

Scott was in trouble up the final fairway and was observed in deep conversation with is caddy Steve Williams after his tee shot at 18 veered into the trees.

However with the comfort from Williams ‘If you can get a club on it, then go with the 7-iron’. Scott put his second into a greenside bunker but managed to get up-and-down for par.

“It was very difficult out there today. Anything even par or better at a Major is normally a good score, especially today, I would say. And that par kept me in the tournament.”

“I knew if I finished the day in red numbers I would be in a pretty good position going into the weekend.”

“It just means tomorrow’s round’s extremely important for me. It’s going to have to be maybe the best round of the week.”