If there is one thing you can say about the senior golfers, they never give up.

Certainly that was the case in the recent Bartons/BMD QLD Senior PGA Championship when even four sudden-death playoff holes, in fading light, were not enough to separate Peter Senior and Richard Backwell. 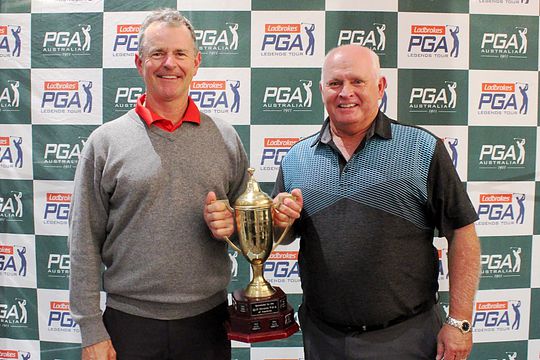 In the end officials were forced to declare the two well-performed veterans joint winners of the event after they finished tied at the top on five-under-par in the 36-hole event at Wynnum Golf Club.

Heading to a playoff to determine an outright winner, both players parred the first two playoff holes, the first and the ninth.

The second time around (third playoff hole) Senior drove the green on the par-four first hole, leaving himself a 40-foot eagle putt.

As his name suggests, Backwell refused to ‘back’ off and made a great up-and-down for birdie and when Senior left his eagle putt short, the pair continued back to the 156m par-three ninth hole.

Senior again showed his experience when he hit the green when Backwell missed it. But the former Japan Tour regular made the putt from off the green to put the pressure back on Senior.

Thriving on the pressure, as he has so many times over the years, Senior made the putt and the pair were shortly afterwards declared joint winners.

“It was a special moment just being in a playoff with Peter Senior though after I holed it on the fourth playoff hole I always felt like he was going to make his,” said Backwell.

“That’s why he is one of our greats.”