Peter Senior has shown that age is no barrier by winning the UNIQLO Masters at Huntingdale Golf Club.

Twenty-four years after he first won the Gold Jacket and 20 years after he last slipped on the iconic blazer, Peter Senior has once again emerged victorious winning by two shots with a tournament total 8-under 276. 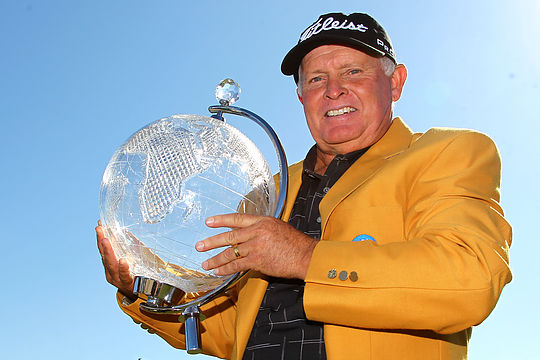 “To win this tournament, the Aussie Open a few years ago and the PGA a couple of years before that, all of them over 50 years of age, I think that’s a big thing for me.”

“Nearly every hole on the back nine everyone was cheering me, even my poor shots. It was just great. I have not had that sort of following for a very, very long time.”

Right from his first tee shot Senior looked the man to beat, opening his final round campaign with back-to-back birdies. A couple of early bogeys on the 4th and 5th didn’t sway the Queenslander, holding his nerve he reignited the pace with two back-to-back birdies on the 6th and 7th.

With three holes to play Senior held a three shot lead, however a birdie from Andrew Evans on the 16 and a dropped shot from Senior on 17 saw the pair tied as he teed off on 18.

Finding the greenside bunker on the 18th, Senior played a beautiful bunker shot and got up and down for par. A nervous wait ensued for Senior as he watched on to see Evans, 27 years his junior, bogey his final two holes.

With this win, Senior has completed the Triple Crown of victories in his 50’s. He won the 2010 Australian PGA Championship aged 51 and the Emirates Australian Open two years later.

At 56 years of age, Senior also becomes the oldest winner of the Australian Masters surpassing Gene Littler who won as a 50 year old in 1980.

While Senior rejoiced, it was heartbreak for Andrew Evans who bogeyed his final two holes to fall out of contention. A tied runner-up finish is still a great result for Evans, who pre-qualified for his place in the UNIQLO Masters.

Tomorrow Evans will head to Liverpool Golf Club in Sydney to try and pre-qualify for a space in the Emirates Australian Open. He tees off at 9.21am with just eight spaces available.

Adam Scott ended his UNIQLO Masters campaign outright fifth on 4-under the card.