Senior lured out of retirement for Australian PGA

The lure of playing in front of a home crowd has convinced Peter Senior to come out of Tour retirement to tee it up at the Australian PGA Championship from 30 Nov – 3 December at RACV Royal Pines Resort.

Senior, 58, took some persuading to compete in the tournament but with his wife spearheading the campaign the two time Australian PGA Champion was a last minute addition to the field. 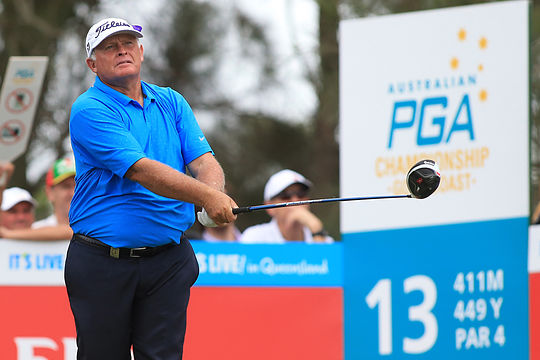 “I rang up at 3.30pm on the day that entries closed, I just had a feeling that I would like to play,” said Senior.

“When you are playing professional golf you never play many tournaments at home. So my friends and family don’t get a chance to get out to the tournaments to have a look. So this gives my family a good opportunity to see me just one last time.”

“They can’t wait; they are more excited than I am.”

Stressing that this is not a comeback, the much loved Australian announced his retirement from Tour level golf after suffering from a hip injury at the Emirates Australian Open.

At the time, he was resolute in his decision, wagering Wayne Grady $1 million he wouldn’t tee it up in a Tour event again.

However, Senior has decided he will make a one-off appearance on the ISPS HANDA PGA Tour of Australasia this summer, believing his year was missing a special something.

“I need to write Grades (Wayne Grady) into my will I think,” laughed Senior.

“I really didn’t think I would get to play any more tournaments. At the time my body was not good and it was just not nice playing injured. Now the body is back to normal.”

“But this is not a comeback.”

The Australian PGA Championship being played at RACV Royal Pines Resort on the Gold Coast, close to his Hope Island home, was the motivating factor for Senior to tee it up.

“I don’t miss tournament golf but I am still competitive whenever I play and since it is at home I would like to play one more tournament.”

“I have been playing pretty good of late and since I didn’t have to jump on a plane I thought I would be happy to give it a go.”

While Senior has taken a step back from the Tour, he has still been playing regularly in pro-am events on the Ladbrokes PGA Legends Tour.

“I play about 22 pro-am type events a year. We had the NSW Senior Open down on the Murray River and I played pretty well for the first couple of days. The last day wasn’t great but I feel like my golf is in a position that I have a fair chance of doing reasonably well,” said Senior, who isn’t just making up the numbers at the Australian PGA Championship.

Senior’s retirement from the game in 2016 was much mourned by Australian golf fans who have always loved watching the affable Queenslander in action.

“When Peter and June (Senior) told me that Pete had decided to play the Australian PGA Championship, as both a golf fan and CEO of the PGA, I was thrilled,” said Gavin Kirkman, CEO of the PGA of Australia.

“Peter has long been a fan favourite and a strong supporter of Australian golf. He has given a lot to our game which is a great testament to his character and his desire to play in the Australian PGA Championship, despite announcing his retirement, continues to show his passion for Australian golf.”

“I don’t expect we will see Peter in action regularly on the ISPS HANDA PGA Tour of Australasia again, so if you’re a Peter Senior fan I would strongly urge you to come and support him at RACV Royal Pines Resort in a couple of weeks.”