Senior racks up another win at PNG Senior Open

Peter Senior has won yet another event on an Australia Tour, taking out the PNG Senior Open with a wire-to-wire victory in Papua New Guinea.

Senior,63, finished at 8-under-par for a five stroke win over Christopher Taylor and Brad Burns. It is Senior’s third PGA of Australia Legends Tour win having won the Australian PGA Seniors Championship twice, the last in 2019. 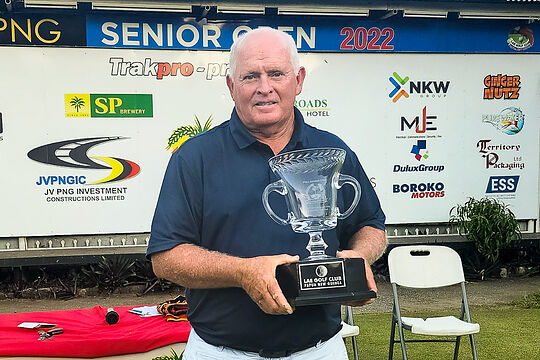 “I hit it well all three rounds, just found it hard to get the ball in the hole with the putter,” said Senior.

“I had a great week and Lae Golf Club have put on a wonderful event.”

The win adds to Senior’s 35 professional titles with an amazing 21 of those coming on the PGA Tour of Australasia. Senior also has four European Tour wins to his credit and three Japan Golf Tour titles.

Senior also leads the Legends Order of Merit over Andre Stolz and Brad Burns. The win in PNG seeing him pocket $15,308 to lead from Stolz by just over $6,000 with total earnings of $37,048.

Senior made his debut on the over-50 circuit the Champions Tour in February 2010 at The ACE Group Classic. The Queenslander has yet to win on the US Champions Tour, but has finished as runner-up on six occasions, with three playoff defeats.

One of those came in February 2012 at the Allianz Championship, when Senior birdied the final hole of regulation to make the playoff before losing to Corey Pavin with a birdie on the first playoff hole.