The local stars were nowhere to be found as all-England final decided this year’s NSW Men’s Amateur Championship. 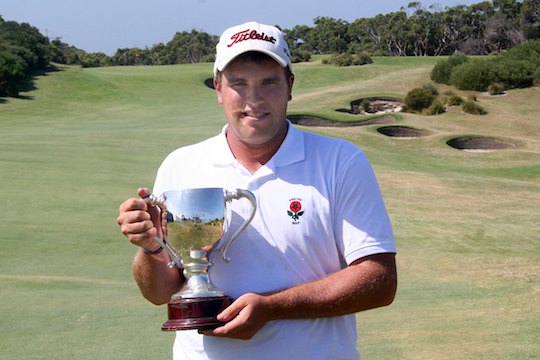 The pair exchanged the lead several times over the first 18-holes, eventually finishing the round square.

The action all began to hot up on the second 18-holes, it was a different story. Senior, the No. 2 seed, took the advantage two-up on the 26th hole, then continued to build his lead to four-up by the 29th.

That score remained over the next four holes and when he reached four-up with four holes to play it looked as if Senior had the title in the bag.

Yet it was all over on the 34th, with Senior winning the match 3/2.

Understandably, Senior was thrilled with the win:

“I’m just really pleased with the result,” he told The Golfer Pacific.

“Matchplay is generally not my strength.

“I’m usually much stronger over 72-holes, so I was really pleased with how I progressed through the matchplay, and then to get the win just exceeded my expectations.

“This should give me real confidence going forward into other matchplay events.”

Senior said that because it was an ‘all-English’ final it was a much more relaxed contest than you might have expected around the course.

“It was great to play with Sully,” he said.

“Obviously we play together and against each other a lot, and it was nice to know that no matter who won it would be an English player,” he grinned.

The pair had to defeat some strong competition to get to the final.

The leading 32 players from the NSW Medal (played the week prior at Cumberland and Liverpool Golf Clubs), were eligible to compete in the NSW Amateur Championship

Matchplay was held at New South Wales Golf Club on from January 31-February 2.

The field in this year’s event had a real international flavor, with competitors from England, New Zealand and even Finland as well as a number of interstate players. It ensured some fantastic matches over the course of the championship, and some great results.

Senior’s name is now added to the list of the oldest major event run by Golf New South Wales, having first been played in 1898.