After he won the Handa Australian Senior Open at Royal Perth recently, somebody asked Peter Senior why he had reverted to a ‘shorter’ version of the long putter.

You may remember Senior putted for years with his chin resting on the handle of the elongated flat-stick known as ‘the broom handle’. 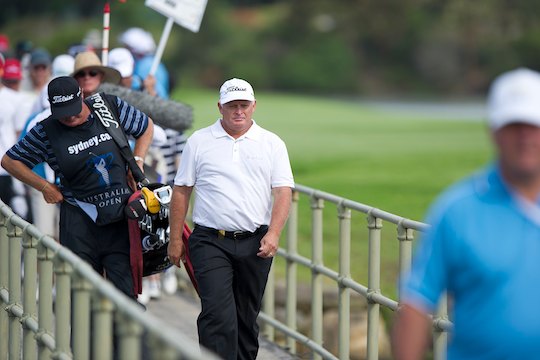 Always one for a bit of a gag, Senior said he had reverted to resting the putter on his chest because in his middle age nature has bequeathed him ‘a number of chins.’

“I didn’t know which chin to rest on the top of the putter so I went back to resting the handle on my chest,” Senior grinned.

He may joke about it these days, but the long putter saved Senior’s career after he became one of the first players to use it on the Australian tour more than 20 years ago.

There were those who said it was outside the rules but officials ruled the long handled putters legal and they are commonplace these days.

All this brings us to a couple of top efforts by Senior in recent weeks, which have proved he’s still a very good player.

He was right in the hunt at The Lakes in the Australian Open before his putter let him down on a couple of absolute tiddlers. In typical gritty fashion, though, the Queenslander fought back to finish five-under for the tournament.

He led from start to finish with rounds of 65, 70 and a steady 72 on the last day, finishing at nine-under par. Senior made amends for his performance at the 2009 tournament where he narrowly missed out in the playoff to fellow Australian, Michael Harwood.

None of the contenders including compatriot Peter Fowler were able to catch him.

A delighted Senior said after his win: “It’s been a great week. The course was sensational and it’s been great to see the European boys out this week.

“To win golf tournaments whether it’s Senior or the main Tour, you’ve still got to play well. It still feels great winning tournaments.”

Ian Baker-Finch, now better known as an international golf commentator than a former British Open winner, proved he still can play the game.

IBF gave an insight into how good his golf game is when he rattled off six straight birdies during the year in a fun match against Ray Floyd, another former major winner.

“I played with Ray and shot 29 on the front nine at Seminole (Golf Club, Florida) – there are times when you can still do it,” IBF said.

The Royal Perth setting for the Open was apt because it was at the same course that Baker-Finch won his first pro tournament – the 1984 Western Australian Open.