England’s Jodi Ewart Shadoff has claimed a one stroke victory over Japan’s Yuka Saso to win the Mediheal Championship on the LPGA Tour.

Ewart Shadoff’s win came in her 246th start on the LPGA Tour and she becomes the 10th player this year to win for the first time on the LPGA Tour, one short of the record set in 1995. 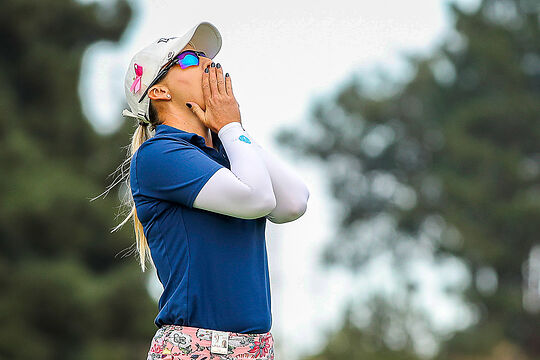 “I learned that I could fight through adversity. I can play under the nerves, which it’s been kind of a problem for me in the past, is just trying to settle the nerves down and play through it.”

“I think I proved to myself that I can do it. I proved I can win. It’s been a long time, and like I could, I didn’t think I would ever be sat here honestly. Just really grateful.”

Ewart Shadoff, 34, turned professional in 2010 and played on the Futures Tour before qualifying for the LPGA Tour in 2011. Her most successful season to date is 2013 when she finished tied for 7th in the 2013 Kraft Nabisco Championship and tied for 4th in the 2013 U.S. Women’s Open. Her best finish to date is second at the 2017 Women’s British Open.

As an amateur she played the US Collegiate circuit attending University of New Mexico where she collected five collegiate wins and was a two-time NCAA All-American.

Sunday’s victory was her first pro title after narrowly missing out at the 2017 Women’s British Open where she finished runner-up.

Karis Davidson and Sarah Kemp finished the best of the Australians in a share of 32nd position at 4-under-par, with Stephanie Kyriacou in a share of 66th position to round out the Aussies to make the weekend.