He knew as much courtesy of his elder daughter, Billie, seven, who said before the event it had been far too long since he had won. 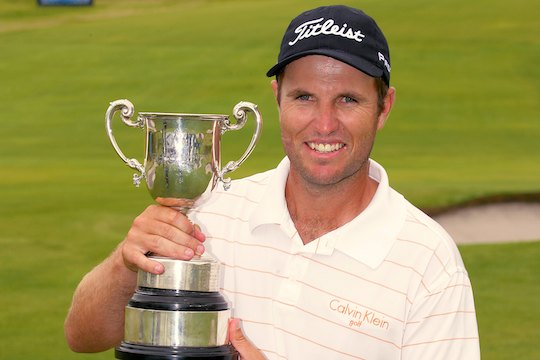 “She has been giving me heaps saying, ‘Dad, it’s time you won another trophy’,” the NSW professional said after lifting the trophy at Spring Valley for his seventh career win.

“I got it done and I’m rapt. I played well for three days but couldn’t get my rhythm for the day and just struggled. Fortunately my putting and chipping was just unbelievable and every hole I had to work for my pars.

“When I’ve won in previous times, I’ve always played really good on the last day to win. It’s been a few years and given the way I played and to get it actually done was really satisfying.”

Originally from Coffs Harbour but a long-time supporter of the event after having in lived in Melbourne for over a decade, Sheehan was genuinely thrilled with the win.

“I love coming to this tournament and it’s a great venue Spring Valley. To finally win after having had (previously) a second in the Vic Open feels great. It’s a great way to start the year,” he said.

Sheehan put in a gritty and determined performance in the final round.

The 33-year-old closed with a one-over par round of 72 to finish at eight-under and win by two strokes from Victorian Matthew Griffin. Young Victorian professional Tony McNaughton was outright third at five-under with Aaron Townsend and Steven Jones finishing in a tie for fifth at four-under.

On an overcast, mild day with moderate southerly breezes providing a respite from the heat and near gale force northerlies of the previous two days, the pressure of the final round saw few last day sub-par charges.

Beginning the day at nine-under, the 2006 Japan Open Champion made a shaky start having to make a 10-metre par putt at the first before holing from 25 metres just short of the second green for a birdie.

Despite a wayward iron at the par-three third, a brilliant pitch to within half a metre from the hole secured another regulation figure for the leader to maintain a three-stroke break over nearest challenger Griffin.

The pattern continued over the opening nine although Sheehan’s lead narrowed with consecutive bogeys at the seventh and eighth. After six straight pars including some missed opportunities for birdies, Griffin birdied the seventh to get to eight-under.

A three-stroke lead may seem an unassailable advantage going into the back nine, but Sheehan was battling with his game that had seen him only hit two greens in regulation over the opening nine. In the end, he held on for a well-deserved drought-breaking win.

The leading amateur for the 2011 Championship was National Squad member Ryan McCarthy. The Tasmanian closed with a one-under 70 to finish on 291 (seven-over), one stroke clear of Victorian State team member Terry Vogel on 292.