Shelton fires 61 on the way to BMW playoff win

The pair finished at 22-under-par in the regulation rounds to go onto par the first playoff hole, the par-4 18th with Shelton parring the second time around after Griffin missed a three metre putt. 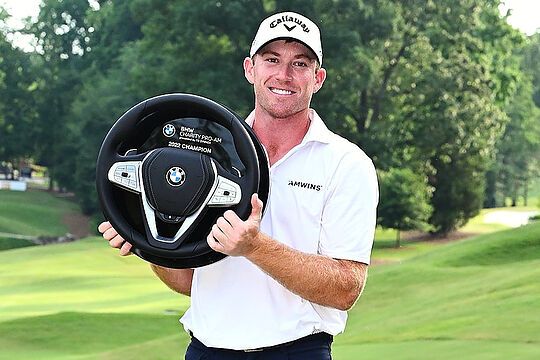 Shelton, who carded a third round 61 began the final round with a five-shot lead over Griffin, but after entering the day 22-under-par he only managed to shoot even in the final round and a bogey on the 18th forced the tournament into extra holes. Griffin posted a 5-under 66 with birdies on the 16th and 17th and a par at the last.

The win and US$135,000 moved Shelton from 63rd to 14th on the 2022 Korn Ferry Tour Regular Season Points List, giving him a rather comfortable 138-point cushion between himself and the 25th spot.

The 26-year-old Shelton now has three wins on the Korn Ferry Tour, the two others coming in 2019 at the Nashville Golf Open and the Knoxville Open.

Ryan Ruffels finished the best of the Australians in a share of 22nd position at 13-under-par, with Rhein Gibson and Curtis Luck three places further back in a share of 25th.

Harrison Endycott moved up eight places with a final round 68 to have a share of 44th position, with Aaron Baddeley in a share of 54th.