Shilton finished at 13-under-par with rounds of 67-68-65-71, having starting the final round with a two stroke lead over Griffin. 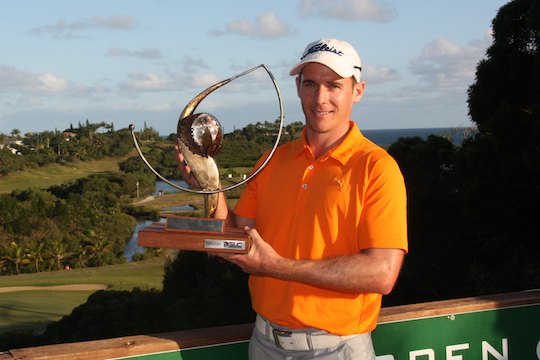 Adam Bland finished in third position at 11-under-par with Henry Epstein, Aaron Townsend and Steve Jeffress in a tie for fourth at 10-under-par.

The win is a huge break for the 33-year-old New Zealander who has spent seven years competing on the PGA Tour of Australasia.

“I’m stoked, it’s been a pretty long time coming so to finally get it done is awesome,” said Shilton who’s previous best result going into the event was a tied 25th at the 2012 New Zealand Open.

“I still felt like I was playing ok, I tried to stay controlled and the whole day just really kept my head on.To finish pretty strong at the end making a few birdies coming in, was awesome.”

The victory in Noumea is certainly Shilton’s biggest in his career to date.

“Not having played a lot this year I didn’t know where I was going to be standing for the next few events,” said Shilton who has a world ranking of 1447.

“I didn’t really know if I was going to be playing well or not so it’s good to come out and do this. I got a wee bit nervy I suppose but that’s going to happen. Considering I haven’t been in that position for ages, especially in one of these events, I am pretty proud of that.”

“It gives me a good start for the order of merit as well, so if I keep playing like this I’ll be alright for next year as well, so it’s all good.”

Defending champion Matt Griffin was overall impressed with his title defence and with the continuance of his fine run of form.

“I’m gaining some form at the right time of the year,” said Griffin.

“Last season I was finding it frustrating as my golf was improving, yet I was not able to put the results on the ground. This year I have so far managed to do that.”

Griffin, 29, heads to Europe this week to contest the Alfred Dunhill Links Championship in an attempt to play his way onto the European Tour

With a one-shot victory last month on the One Asia Tour at the Charity High 1 Resort Open in South Korea, Griffin is optimistic with his chances following another good result in Noumea.

“Straight on a plane tomorrow to Scotland to play the Dunhill Links, so it’s nice to have some good form going in there and hopefully I have a good week,” said Griffin.