An astonishing course record of five-under 69 in the third round helped the young Dundas teenager to a 15-shot victory over 15-year-old Lizzie Elmassian. 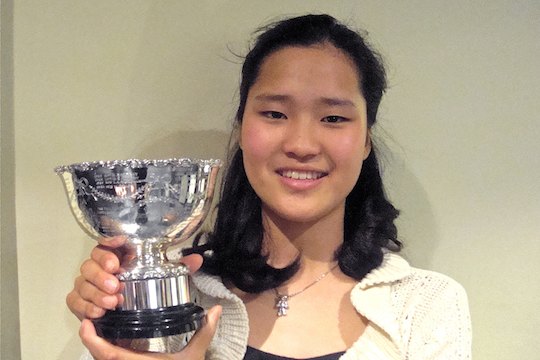 Shin recorded seven birdies and five bogeys in her third round to better her own course record of one-under 73 which she set in winning the Concord Cup in May.

“It was an honour to create history,” Shin told Golfer Pacific.

“But I know it was easier to do because of the support that so many of the ladies have given me since I joined the club last year.”

Shin finished the 72-hole event on two-over 298, again creating history by recording the lowest winning total in the 103-year-old championship.

The shy youngster has gone from strength the strength in just her second year of golf, finishing in a tie for third at the 2011 NSW Amateur despite playing alongside the seasoned Golf Australia duo of Ashley Ona and Jessica Speechley.

While the two 19-year-olds showed their experience on the final day overtaking Shin on the leader board, it was still a solid display by the tall Korean born.

Shin plays with an impressive quiet confidence and is rarely fazed on the course, although she admits her putting can makes her annoyed.

Shin has posted some outstanding results in junior golf this year, winning the NSW All Schools Championship Stroke Play and Match Play in May.

She also streeted the field in the Jack Newton Junior Golf State Age, winning the under 13′s by 54 shots. She also finished fourth in the overall category behind the winner, Australian Junior Amateur Champion, Cathleen Santoso.

This month she has her eye on winning the Srixon International Sub Junior Classic which is being played at Kurri Kurri in the NSW Hunter Valley.

Shin is familiar with the Kurri Kurri course, having won the 12-years division in the same event last year.