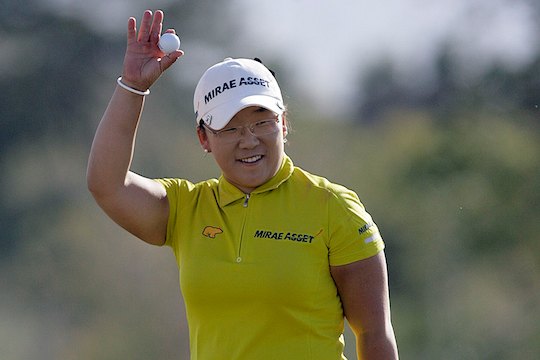 The world No.8 had twice been runner-up in previous Australian Opens but this was her day.

Tseng, of Taiwan, closed with a seven-under 66 and moved to within a shot of the lead with three holes to play after starting the day eight strokes behind the runaway leading pair.

A curling 9m eagle putt on the par five sixth hole jumped her from outsider to contender.

She tugged her approach on the 18th into the trees when pushing for a final birdie which never came.

Amateur Ko (63-69-70-76) carded a disappointing three-over-par 76 to finish four shots behind the winner in third.

“I told Lydia she made me sad because she made me feel old,” joked Shin of the banter between the pair before the final round.

Shin is just 24 herself and her 11th LPGA title is a mark that she feels Ko has in her one day in the future.

“Lydia will have many chances to win. For me to finally win in Australia makes me very happy,” Shin bubbled.

“I came here the first time when I was 14 or 15 to play. I really fall in love with Australia and this is my 10 visit or more.

“I learnt some slang…gidday mate. I enjoy the meat pie and watching the kangaroos.

“Around the 18th hole, there were so many people to walk through. I feel I have so many supporters here.”

Her lob wedge from the thick grass beside the 12th green was the turning point.

She chose to play the ball as it lay rather than consider a drop from a wooden sign because she wanted to preserve the ball sitting up in the grass. It dropped unerringly into the hole.

Ko’s day began poorly when she took two shots to get out of the trees on the opening hole when she tugged her drive into the woods for a double bogey seven.

Shin’s birdie on the hole gave her an immediate three-shot buffer.

Ko pulled back birdies on the fourth and fifth. A crazy swing of fortunes on the 12th put Ko and Shin back in the lead together.

The Kiwi holed a nerveless 6m putt for birdie while Shin missed from 4m for bogey.

An untidy run home of two bogeys in her closing six holes stymied the young amateur’s hopes of a charge.

“Third is a professional tournament is a pretty good result but I can’t say I’m fully pleased. I think it was just a couple of drives and a few putts that were off today,’ Ko said.

“But overall, I had my career low (10-under 63) here last Thursday so it’s been a pretty good week.

“I was pretty proud of Jiyai chipping in.”