Not only has the 27-year old Bath-born golfer captured a first Tour title in his 112th Tour appearance but he’s the first golfer on the Tour to win in Cyprus and the 50th nation to host a European Tour event. 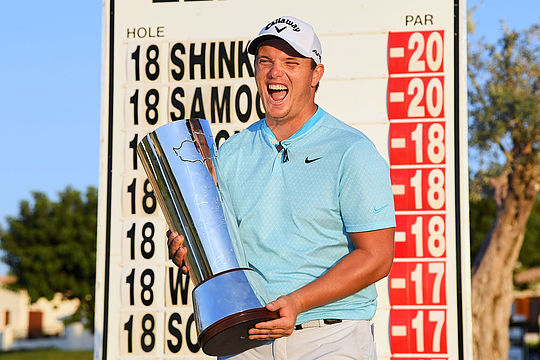 Shinkwin firstly holed a near 50-foot putt for eagle at the 72nd hole in a new tournament course record of 63 and then birdied the same 18th hole at the first extra hole to defeat Finland’s Kalle Samooja, who had himself birdied his last in regulation in a score of 64 but then missed a putt from a similar distance for par in the play-off.

“It’s something I’ve always wanted to do (win on the European Tour), and now I have. It’s been a bit of a shock, but it feels great,” said Shinkwin, who was later connected via a greenside laptop to wife, Stephy and young son, Oscar.

After an excellent amateur career, Shinkwin graduated from the European Challenge Tour in 2015 and looked to quickly have adjusted to life on the European Tour, comfortably keeping his playing privileges in his rookie campaign.

The following season saw him miss out in a play-off to Rafa Cabrera Bello at the Aberdeen Asset Management Scottish Open when a par on the 72nd hole would have handed him the title, and he went on to lose his card in 2018.

“I noticed at the start of the week they have cider here, which I love. They’ve got Somersby and Kopparberg so I think I’ll celebrate with a few of them tonight.”

Western Australia’s Jason Scrivener recorded his best finish of the season in a share of 6th place following a final round 64. This week’s result marks his fifth top-20 of the season.

Maverick Antcliff was the only other Aussie to make the trek to Cyprus, finishing in 41st place.