England’s Callum Shinkwin claimed his second European tour title with a four-shot victory in the Cazoo Open on Sunday.

Despite bogeys at the seventh and eighth, Shinkwin made his fourth birdie of the day at the ninth to give him a five shot lead with just nine to play. On the back nine he played steady golf to claim the title and a birdie on the 11th all but secured the win.

“I played well today and this golf course is a heavy strokeplay golf course and, as long as I did what I had to do, unless someone came through the pack, which I knew wasn’t going to happen because the course was playing too tough, then it would work out,” remarked Shinkwin.

“The scores haven’t been there before this, but this week was my week. Winning anywhere is fantastic, it’s a great feeling, winning with family and friends here it means so much more.”

The World No 304′s closest challenge came from Connor Syme, who carded a three-under 68 to finish in second position at 8-under-par.

Shinkwin collected 460 points to move 65 places to 28th in the season-long standings and comfortably inside the top-50 who qualify for the DP World Tour Championship, the final Rolex Series event of the year, at Jumeirah Golf Estates from November 17-20. 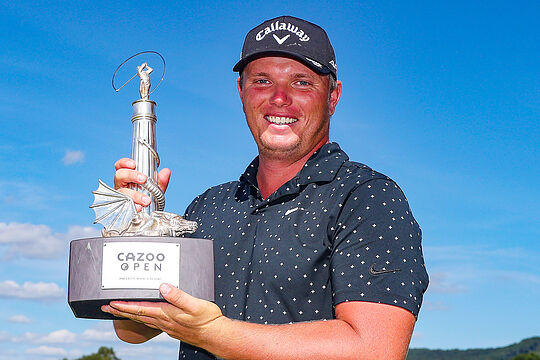 Dimi Papadatos was the best of the Australians finishing in a share of 63rd position and the only Aussie to make the weekend.

The DP World Tour moves on to the US$1.5 million ISPS Handa World Invitational presented by AVIV Clinics this week in Northern Ireland. The August 11-14 event at Galgorm Castle Golf Club in Country Antrim is tri-sanctioned by the LPGA Tour and Ladies European Tour.