The class of a former world number one and a two-time major champion finally shone through on the Gold Coast as Korea’s Jiyai Shin captured the 2016 RACV Ladies Masters at RACV Royal Pines Resort on Sunday.

With three of the Ladies European Tour’s most talented players in hot pursuit, Shin recovered from faltering bogeys on the 11th and 13th and a short missed birdie opportunity on the 12th to steamroll home to a final round four-under 69 and a three stroke win over England’s Holly Clyburn by three shots. 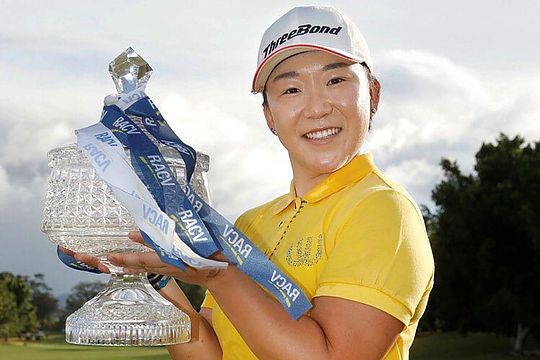 Shin had held the overnight lead by two shots from Clyburn and Sweden’s Camilla Lennarth who both caught Shin by the 5th hole before she birdied the 6th to again edge clear.

Two more birdies at the 8th and 10th saw the margin out to two strokes before the weather started to play a factor, with rain squalls sweeping in to combine with a mounting breeze.

The imposing Dane Nicole Broch Larsen was also surging into contention by this stage but Shin recovered her errors through holes 11-13 with when she holed out for birdie on 15 and stuck it close for another at the par-three 16th.

The two-time British Open winner and a lover of links golf seemed to revel in the worsening conditions with her latter birdie proving to be the most telling, as her competitors could not keep pace despite having good opportunities for birdies themselves.

A stroll up the par-five 18th resulted in a two-putt birdie and a convincing margin of victory in the end. With her arms thrust aloft, the 27- year old now holds an Australian Open/Ladies Masters double, having won the 2013 Women’s Australian Open at Royal Canberra in the national capital’s centenary year.

“I really wanted to win this tournament because previously I came second. I really want my photo up with the past champions,” an elated Shin said, “I got a lot of motivation from each. I feel really good.”

And in what would be music to tournament promoter Bob Tuohy’s ears, Shin concluded with: “It is great to win, that means I get to come back next year.”

Clyburn also birdied the last to finish alone in second place at 11-under, while Lennarth and Broch Larsen finished in a tie for 3rd place at 10-under par. The highest ranked player in the field, Canadian Brooke Henderson, recovered from a mostly forgettable final round with a magnificent eagle on the final hole to pull inside the top 10 in a tie for 8th place.

16-year old Korean Hye Jin Choi shot an incredible 62 in the qualifying event on Monday to earn a place in the field and continued that form to finish as leading amateur at 8-under par, in a tie for 5th place.

Amateur Hannah Green put in a rousing display to finish as Australia’s leading player at 2-under par in a tie for 12th, a stroke ahead 2009 Ladies Masters Champion Katherine Kirk at 1-under par in 17th place.

The strength in Australian amateur ranks was also underlined by the impressive showing by Gold Coast teenagers Karis Davidson (T18th) and Rebecca Kay (T27th), who were each making their second Ladies Masters starts and looked extremely comfortable in their surrounds.

The ALPG season draws to a conclusion this week with two remaining events: the Brisbane Invitational at the McLeod Country Club from March 1-2; and the BWAC Regional Services ALPG Pro-am at Yamba on March 4.