Should the PGA Championship be moved to May?

Calls to move the final major of the year to a date earlier in the year have been gathering momentum in the US, following the horror weather which plagued the US PGA last month.

Despite moving the event forward a couple of weeks to accommodate the Olympic Games, Baltusrol was still hit with a stack of weather delays, taking a lot of gloss off watching the event for viewers all around the world. 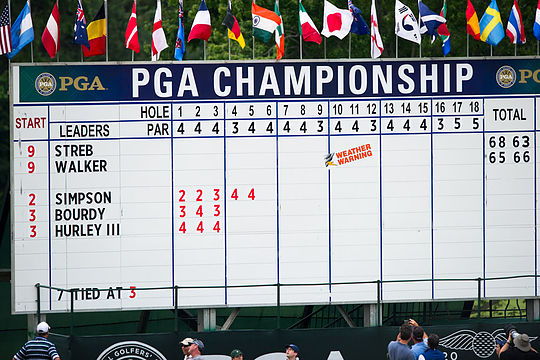 Golf writers in the US pointed out that the PGA Championship seemed to be continually putting up with massive storms, flooding and coping with saturated golf courses each year when the fourth major is contested.

And suggestions are that the best way to counter that would be to move the “fourth” major of the year to a May date, when almost the entire US is basking in warmer weather and clear days.

A similar move with The Players Championship has certainly added ammunition to any proposed change.

The USPGA Tour moved The Players to May for a number of reasons and one of those was the golf course might be in better condition in May than in March.

There was also the fact that the event always had to compete with the NCAA basketball tournament on TV and for media attention.

Plus there was a feeling The Players came off looking like a lucrative warm-up for the Masters.

Bad weather – wind and rain – is more likely in Florida in March, but so is good weather – seasonable, comfortable temperatures.

Of course many will tell you the majors are too close together as it is – and once the PGA is done and dusted golf fans have to wait almost nine months before the US Masters rolls around again on the second weekend of April.

We could also argue that the US does have three of the four major championships – and their golf season is not as long as, say Australia’s is.

Still it’s also worth pointing out that 35 years ago the US PGA was actually played in February in what was a move to be the first major of the year.

The plan then was to appease those in snowbound areas who were dying to thaw out by watching some major golf.

The problem with that was that the February date severely limited the golf courses where the championship could be played.

Goes to show, when it comes to golf, you can never please everybody.