Germany’s Marcel Siem has won the BMW Masters in thrilling fashion, chipping in for a birdie at the first hole of a play-off with Frenchman Alexander Levy and England’s Ross Fisher at Lake Malaren Golf Club in Shanghai.

With blustering winds buffeting players on the final day, the German bogeyed the last two holes to sign for a one over par 73 and a 16-under total, level with overnight leader Levy who struggled to a 78, and Fisher who recorded a marvellous 67 earlier in the day. 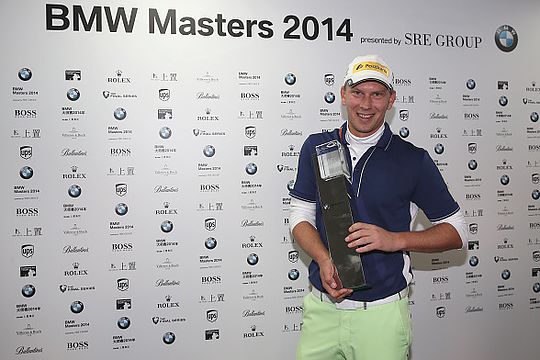 Siem actually had a seven-foot putt for the win on the final hole in regulation but missed the putt to the right to send the trio back to the 18th tee for a sudden-death play-off.

After hitting the longest tee shot, Siem watched both Levy and Fisher hit good approach shots to the 470-yard final hole before his own shot, which covered the flag in the air, pulled up short on the fringe in thick rough.

However, the 34-year old struck gold when his pitch rolled deftly into the hole and when the other two missed their birdie attempts from around 20 feet, Siem was the winner.

“The golf course was the total opposite to the first three days. It was a real monster, so I’m super pleased.” Siem said, “A chip in is always cool, but to have a in a playoff is even cooler. It’s the third tournament I’ve won in a playoff so far.”

“The only problem I have now is that my wife flew to Thailand because I wanted to have a little holiday with her there, so now I have to get her to China. Hopefully I can get a visa. I don’t mind having this problem though!”

“I came here with very, very low expectations because of my two surgeries this year. Now I’m on the right track again to get back in the top 50 in the world.”

“Playing the tournaments with the best players in the world is really the goal I have. I’m really over the moon to have the chance to compete next week with the guys.”

It is Siem’s fourth European Tour title and he has now earned a spot in next week’s WGC-HSBC Champions, also in Shanghai.

Welshman Jamie Donaldson (75) and England’s Justin Rose (72) shared fourth spot, one shot out of the play-off.

In search of his third win of the year, overnight leader Levy was relatively upbeat despite his closing round of 78.

“I made a few mistakes, but I didn’t miss a lot of shots. I just hit some wrong shots in the wrong places and I putted badly in the wind. I need to work on that.”

“Marcel deserved to win today because he played fantastic in the wind.”