Harrison Endycott continues to show fine form on the Korn Ferry Tour with another top-10 result after finishing 4th on Sunday at the Visit Knoxville Open.

Endycott finished at 16-under-par, four shots from eventual winner American Greyson Sigg for his best finish so far on the tour. This season, Endycott has, to his credit, a 5th place result at the Louisiana Open and a tie 8th at the Wichita Open. 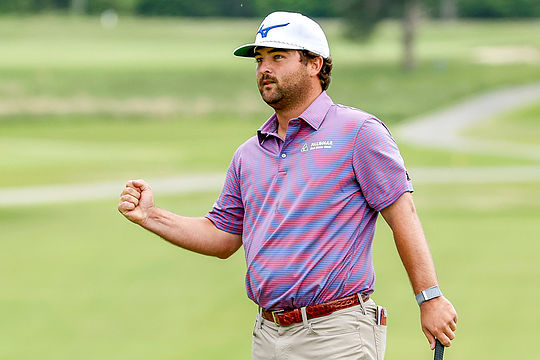 In 25 starts this season on the Korn Ferry Tour, Endycott has made the cut in 18 having recorded six top-25 results. The 24 year-old moved from 77 to 61 on the Season Standings with the top-75 qualifying for the Korn Ferry Tour Finals.

Sigg made a two metre par putt on the 18th hole to secure a one-stroke victory, his first on the Korn Ferry Tour, over Germany’s Stephan Jaeger.

Sigg opened the week with a 61 before a final-round 66 allowed him to snag victory at Holston Hills Country Club in Knoxville, Tennessee. His previous best finish was a solo second in the Korn Ferry Tour Championship last August.

“It’s hard to do. I mean, you see it every week where guys struggle to get there. Good players who I feel like should be there, aren’t,” said Sigg. “I’ve been doing it my whole life to get there and today I solidified it, so today it’s a pretty special moment for me.”

Jaeger, 31, was also looking to tie Jason Gore’s record for most wins with seven on the Korn Ferry Tour but could only manage an even-par round of 70 as he closed with a bogey on the 17th hole and a par on the par-5 finishing hole.

Curtis Luck was the next best placed Aussie behind Endycott finishing in a share of 60th at 3-under. Brett Drewitt moved nine places on Sunday after a closing 67 to share 66th position. Drewitt currently sits 24th on the Season Standings just inside the top-25, who earn PGA Tour cards.

Jamie Arnold, Brett Coletta and Ryan Ruffels missed the cut. Colette currently sits 68th whilst Ruffels is 80th on the Season Standings, needing to remain inside the top-75 to make it to the season tour finals.