Michael Sim has returned again to the winner’s circle securing the WA Open Championship at Cottesloe Golf Club on Sunday.

Sim held off challenges from Rick Kulacz and Hayden Hopewell with the trio collectively 35-under par after the first three rounds. 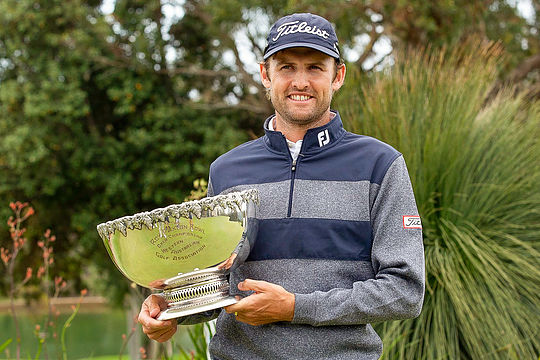 Sim carded a final round 1-under par to collect the winner’s cheque of A$18,301 finishing the championship at 15-under-par for a one stroke win over Hopewell.

Earlier Sim was able to widen his lead with a string of birdies at 11,14, 16 and 17 to reach 15-under par with one to play. It was the buffer he needed after finding trouble off the tee on 18 and needing to make par to prevent a playoff with Hopewell after the amateur made birdie on the last.

“I knew I had two shots going up the last but when Hayden holed his, I had to switch and make sure of holing the small putt,” said Sim.

This and a third place result last week at the WA PGA Championship kick-starts a big summer of golf for the West Australian.

“It’s amazing to get another win and especially to back up from last week, this will give me a lot of confidence moving into some big events now.”

Tour journeyman and multiple winner on the Australasian Tour, Michael Wright, got to a 13-under par total to join Sim at the top of the leaderboard before an unfortunate bogey at the last dropped him back to a 12-under total and in tie for third place with Dale Williamson, Daniel Fox and Aaron Wilkin.

Sim will be full of confidence when the PGA Tour of Australasia returns at the Victorian PGA Championship at RACV Cape Schanck Resort this Thursday.