American Webb Simpson saved the best for last on Sunday at the Waste Management Phoenix Open, closing with two birdies to get into a playoff with Tony Finau. Simpson’s putter had been running hot over the closing stages and he kept it running.

Finau had led by two with three to play. They both parred 16, but Simpson picked up a stroke when he drove the par-4 17th and two-putted for birdie. Both players had birdie putts on 18, and Simpson went first, rolling his in from three metres to put the pressure on Finau. Finau had a 1.5 metre putt to win, but he missed it on the low side, setting up the playoff.

On the first playoff hole, Simpson again birdied No. 18 for his first win since the 2018 Players Championship.

“It was a lot today,” said Simpson, the 2012 US Open champion. “Tony is a great champion. He played awesome today. To come down to the last couple of holes and then birdie 18 twice feels great.”

For Finau, who was a late entry into the tournament after initially committing to the Saudi International, it was another near miss and a disappointing first Phoenix Open since his recent move to Scottsdale.

“I had a chance, a great chance to win this week,” said Finau. “Unfortunately, it didn’t happen, but my game’s better than it’s ever been.” 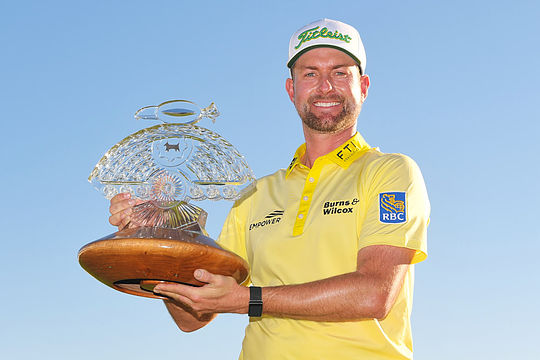 Finau’s loss continues his string of near misses. Finau has five top-10s in the last eight major championships, but he has just one PGA Tour victory with the 2016 Puerto Rico Open. Yet since his maiden PGA Tour win he has recorded 29 top-10′s.

Justin Thomas birdied four of the last six holes to shoot a final round 65 and take the early clubhouse lead at 14-under, and he ended up in a share of third along with fellow Americans Bubba Watson and Nate Lashley.

Aaron Baddeley was the best of the Australians in a share of 40th position, a closing 68 moving him eleven spots up the leaderboard and was the only Aussie to play the weekend.

For Simpson the win means a move back inside the World’s top-10 for the first time since 2012. The win also cements his current streak of 16 consecutive starts in which he hasn’t finished outside the top-30.