Simpson grinds out US Open win in style

American Webb Simpson has won the 2012 US Open championship finishing at 1-over-par and defeating MIchael Thompson and Graeme McDowell by a stroke.

It was the fifth time in five US Opens that a champion has come from behind to win the title.

Simpson carded a final round 68 to catch third round leaders Jim Furyk and Graeme McDowell, both former US Open champions.

“I got off to a slow start but knew that I had to stay patient,” said Simpson, after opening with two bogeys through the first five holes.

“I knew that there were birdie holes on the back nine and I could make a move there. At the time I wasn’t thinking about winning, but was just focusing on keeping my score going and keeping bogeys off my card.”

Simpson started the final round at 3-over-par and in a tie for 8th position. Three consecutive birdies through the 6th, 7th and 8th holes followed with another at the 10th had Simpson at 1-over-par and the momentum going his way.

Furyk, who shared the overnight lead with McDowell at 1-under-par, saved par with a five metre putt on the 12th hole before following with a bogey to fall into a tie with Simpson at 1 over.

When Furyk snapped hooked his drive into the trees on the 16th it would lead to a bogey and with that his chances of claiming another major.

The difference in this championship – Furyk was 3 over on his round through 16, Simpson was 2 under through 17. Precision putting and driving were the key today for Simpson.

When Simpson’s ball found the bottom of the cup with a palm sweating two metre putt on the 11th, it would prove to be the clincher that he needed to keep his game going. 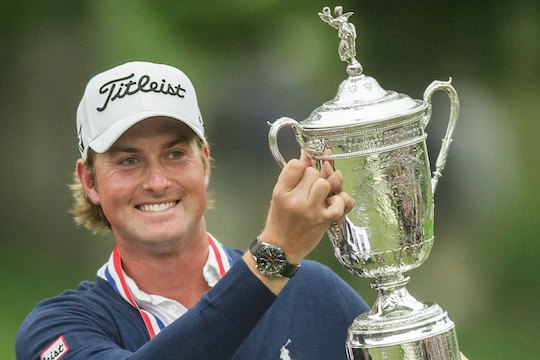 Webb Simpson with the US Open Trophy after the final round of the 2012 US Open (Copyright USGA/Jed Jacobsohn – Courtesy of www.usga.org)

“That was the turning point for me today,” said Simpson.

“It was nerve wracking watching Jim and Graeme come from the locker room. In fact I have never been that nervous before. I am just so honoured to have won a US Open.”

A string of pars on the way in, including a delicate up-and-down on the 18th, had Simpson in the clubhouse watching Furyk and McDowell battle it out.

When McDowell birdied the 17th to move to 2-under-par the pair headed down the 18th needing a birdie to force a 18-hole Monday play-off.

The pressure of winning another major at 42-years-old would prove too much for Furyk with his approach on 18 lying half-buried in the left side bunker sand only to then blade his ball across the green.

McDowell needed to sink a makeable four metre putt to tie with Simpson, but his open chances slipped by with his ball missing the cup on the low side.

Watching from a monitor in the locker room, Webb Simpson had become the 2012 US Open champion in just his second appearance at the championship and fifth at a major.

Michael Thompson had earlier shot a 3-under 67 to take the clubhouse lead at 2 over. The 27-year-old, who was the runner-up at the US Amateur at Olympic Club in 2007, would finish in a tie for runner-up along with McDowell.

John Senden finished the best of the Australians in a tie for 10th position at 5-over-par, four from the leader.

Adam Scott moved twelve places to finish in a tie 15th position at 6-over-par with a third consecutive round of even par 70, his opening 76 damaging his chances earlier in the week.

Alistair Presnell capped off a stellar week in his first major with a closing even-par 70 to finish at 9-over-par for a top-30 finish.

Tiger Woods finished with a final-round 73 to be seven over for the tournament. The 14-time major champion dropped six strokes in the first six holes, including a double bogey on the par-3 third.

Ernie Els finished in equal ninth after being in and out of contention for much of the final day.