It looked like being a Monday finish but play was finally able to get underway following a three-hour rain delay and it was Webb Simpson, who came out on top of a crowded leaderboard.

The 2012 US Open champion reeled off five birdies in the space of six holes from the par 4 12th before safely knocking in a par on the final hole to leave Abraham Ancer and Tyrrell Hatton one and two shots back with the 18th hole to play.

Hatton and Ancer settled for a par each leaving Simpson with his second title of the season and a new tournament record at 22-under breaking the number set by Brian Gay in 2009 by two shots.

Simpson said in an interview afterwards that he was forced to get more aggressive with the field going so low on the final day – nine players in the top-10 finished at 65 or better in the final round.

“I think it’s a good thing that guys were making birdies because they kind of forced me to be a little more aggressive and know that pars weren’t going to cut it. I was only 2 under through 11 holes today for the round and had to make birdies,” said Simpson.

What’s In The Bag: Webb Simpson

“It’s typically not a golf course where you can force it, but today after the storm, it softened things out, not much wind, we could go attacking. Guys kept making birdies. I was blown away with the scores, but there I hit my run, 12 through 17, and ultimately that’s what made the difference.”

The father of five ’s Father’s Day victory takes him to No.5 in the world rankings and to the top of the FedExCup rankings. 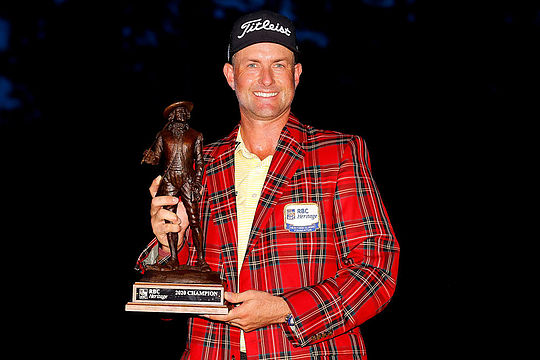 While Simpson certainly earned his victory, you have to spare a thought for those who finished behind him.

“I probably had one of my best ball striking weeks in my career. So that’s nice. I gave myself a lot of chances,” said Ancer. “Big props to Webb. He played amazing down the stretch, especially in the end…tons of positives this week.”

Rory McIlroy was disappointing again in the final round, closing with a 1-under 70 for a share of 41st place.

Prior to his PGA Tour return last week, the 31-year-old hadn’t finished outside of the top-5 since the BMW Championship in August last year.

Matt Jones was the sole Australian to make it through to the weekend, finishing at 9-under and in equal 52nd place. Aaron Baddeley, Jason Day and Cameron Smith all missed the cut.

The Tour now heads to the Connecticut for the Travelers Championship where seven of the world’s top-10 players are confirmed in the field.

Rumours continue to swirl around Tiger Woods’ absence and will continue again for this week with news that he will not be playing at the Travelers after missing Friday’s entry deadline.