The first stage of PGA Tour of Australasia Qualifying School presented by Cobra Puma Golf is complete with 50 players advancing to final stage.

With 170 competitors playing across three venues, the Sandhurst Club, Riverside Oaks Golf Resort and Noosa Springs Golf and Spa the competition was fierce. 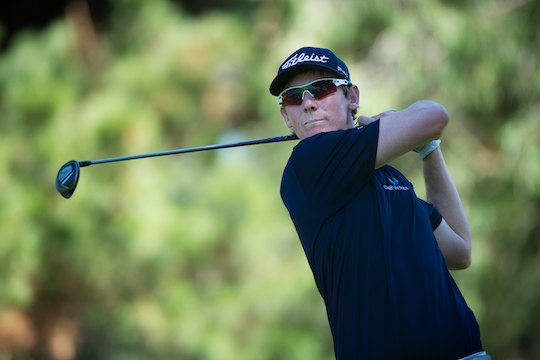 Taking Medallist honours at the Sandhurst Club was Todd Sinnott who led after each round of the competition.

Sinnott fired an even par final round for a tournament total of 8-under the card to ensure his place in final stage.

With 19 places through to the final stage available and four players tied at 4-over the card a playoff was conducted with Michael Moore (VIC), Daniel Pearce (NZ) and Mathew Perry (NZ) progressing.

Victorian Kevin Conlong was the fourth player in the playoff and unfortunate to miss out.

At Riverside Oaks Golf Resort, Alex Katholos claimed Medallist honours by one shot from Neven Basic with a tournament total of 8-under 205.

Of those teeing up 15 players have advanced to final stage, with no playoff required the cut off number was 1-under the card with Jamie Hook the last man to qualify.

Jonathon Holder has taken medallist honours at Noosa Springs Golf and Spa shooting a final round 3-under 69 to finish on a total of 6-under the card and three shots clear of Luke Henwood.

Holder turned Professional and joined the PGA Tour of Australasia in 2013 before losing his card in 2014.

Six players were tied for the final two positions available through to final stage on 3-over the card.

It was Michael Hansen who stamped his authority with a birdie down the first play-off hole to secure his position.

Unfortunately first round leader, Gavin Fairfax, made a disappointing bogey which left four players playing for the final position.

It was New Zealander Sven Puymbroeck who finally clasped the last qualifying position with a birdie on the 9th playoff hole.

The final stage of the PGA Tour of Australasia Qualifying School presented by Cobra Puma Golf will be held at Victoria Golf Club from 6-9 January 2015.