Six years on and Scott, McIlroy are all square

Six years on from their drama charged ‘Down Under’ showdown and let’s just say Adam Scott and Rory McIlroy are all-square following the Aussie’s impressive Genesis Invitational success in suburban LA.

Scott brilliantly celebrated a 20th year in the pro ranks fighting back from a horror two holes early in his final round to win by two shots in securing a 31st pro career win. 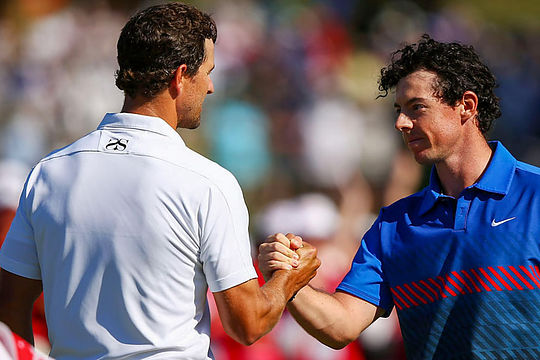 McIlroy also faced his own meltdown just five holes into his Riviera last day but unlike his Aussie playing partner he never recovered with the records now showing he shared fifth place.

Rewind to December 2013 and Scott and McIlroy were paired over the final round of the Australian Open at Royal Sydney.

Scott was seeking a second Australian Open title in front of an overwhelming patriotic ‘down under’ crowd and headed to the 72nd hole one shot clear of McIlroy.

McIlroy was contesting his final event of a horror 2013 season that began as the centre of a massive fan fare in Abu Dhabi to herald his mega-bucks signing with sports equipment giant, Nike.

Any Nike joy quickly turned pear-shaped with McIlroy missing the cut not only in Abu Dhabi but controversially quitting mid-round in the defence of the Honda Classic while sitting out the weekend rounds in the BMW PGA, the Irish Open, and the Open Championship.

He arrived in Sydney for his 23rd and last tournement of 2013 and with a best showing of a 2nd place in the Valero Texas Open and, of course, desperate to continue a trend of having won at least one event a year since his first taste of success in 2009.

All Scott needed to do at Royal Sydney was par the last to endear himself to all-and-sundy but McIlroy proved an unlikely villan with Scott taking bogey while McIlroy posted a birdie to capture the Stonehaven Trophy.

That clearly was not going to happen last Sunday and the clear lack of chit chat between Scott, McIlroy and Matt Kuchar somewhat showed that.

“It was a pretty difficult day and there wasn’t much chat out there between the three of us, we were just trying to concentrate on what we were doing,” said McIlroy confirming the final round tension in the group.

While Scott has well and truly moved on since the events of December 2013, the 39-year old gifted McIlroy a lesson in overcoming golfing adversity and not only winning his first event of the New Year but also capturing back-to-back titles for a second time in his now 20-year career.

“My career is in a good spot,” Scott insisted.

“Even before winning this week, I feel like physically and somewhat mentally I’m okay after 20 years out here.”

“I really do believe if I can maintain motivation and focus, the next five years can be my best years on tour but it’s easy to say those things, it’s very hard to do.”

“Maintaining that focus and that drive for long periods of time isn’t easy, but I think I need that to achieve everything I — to leave the game satisfied at some point.”

“They’re pretty lofty goals, so this is a good start. It’s one week out of the next five years.”