Rory McIlroy was in sizzling form shooting a 67 but for a second time in a major clocking a spectator during the opening round of the PGA Championship at Kiawah Island.

Three weeks ago, McIlroy floored a young Bristol lad, with an errant drive down the 15th on the second day at Royal Lytham and St. Annes. 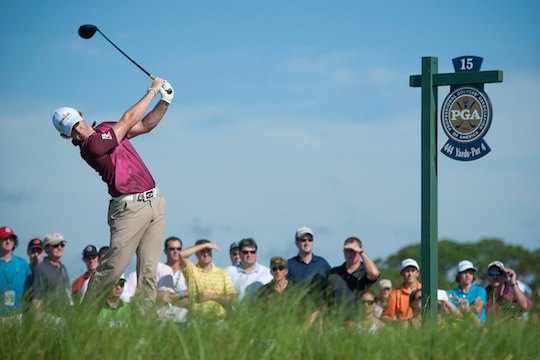 Rory McIIroy fires his tee shot down the 15th at Kiawah Island during the opening round of the US PGA Championship (Photo: Anthony Powter)

McIlroy’s latest victim was a 30s-looking woman who he hit on the right hip with his tee shot at the par three, 17th he was playing as his eighth.

The world number three enquired about the woman’s health but she required no medical attention, and after McIlroy had putted he went to present the woman with his golf ball.

“It’s becoming a habit hitting people in majors, so I’ll try not to do that again,” he said smiling.

Sweden’s Carl Pettersson posted a six under par 66 to snatch the early lead in the 94th PGA Championship.

And already looming large in the final major of the season is Tiger Woods who had been struggling at one over par through five holes but ended with a three under par 69.

McIlroy’s super round of six birdies was his lowest-ever round in four appearances in the PGA Championship.

“It was a great way to start the tournament,” he said.

“I was hitting balls on the range this morning and there was completely no wind. It was flat calm and I really thought that I had to take advantage of the conditions.

“So I got off to a great start to be three under par through seven and just took it on from there. So I’m very happy with the round, and it’s a great score to build on.”

After some indifferent showings in recent weeks that saw McIlroy lose this No. 2 World Ranking to Tiger Woods, the sparkle has again returned his game, as was evident in finishing fifth in last week’s WGC – Bridgestone Invitational.

McIlroy had an hour last week in Ohio again with legendary Dave Stockton. It had been Stockton who McIlroy’s caddy, J P Fitzgerald suggested he turn to following last year’s Augusta implosion.

Stockton had spent some 15 minutes a few weeks later with McIlroy at Quail Hollow and then a few weeks produced his stunning Congressional command performance.

“I worked with Dave again a little bit in Akron last week. I know we made a slight adjustment to my routine and my stroke, and it made a huge difference last week. I felt so much better on the greens than I did at The Open.

“He sort of just said to me, “You know, just go out there and have fun and enjoy it and smile.”

“So that’s something that I’ve really tried to do the last two weeks, and it’s definitely helped.”