Slater, whose only previous victory came at the 2020 South Australian Amateur, fired weekend rounds of 65 and 66 to make up for a wild second round 73 on Friday to win by a shot on 15-under from Melbourne’s Toby Walker. 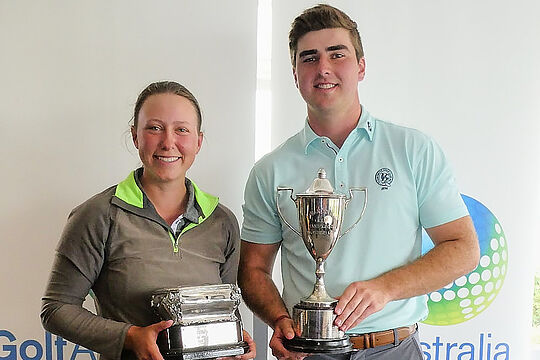 “Congratulations to BGC Members @samslater3480 and @samboh95 who have finished 1st and 3rd respectfully at the Tasmanian Open conducted at Kingston Beach Golf Club this week,” posted Slater’s home course.

In the women’s event, South Australia’s Caitlin Peirce has secured her second Tasmanian success taking out the Women’s Tasmanian Open by eleven shots.

The Royal Adelaide member stunned the field with a superb final round 9-under 62 to post a 10-under total and record her second major amateur title following victory late last year in the Tasmanian Amateur Championship. Peirce now has three top-5 finishes this season from four events.

Tasmania Golf Club’s Mackenzie Wilson flew the flag for the locals claiming a distant second place on 1-over and making it the 10th top-10 finish of her amateur career and beating her previous third place results at the 2021 Port Phillip Open Amateur and Victorian Amateur and the 2021 Tasmanian Junior Masters.

Victoria’s Keeley Marx was outright third on 2-over.