(New Orleans, LA:) An emotional Cameron Smith was at first lost for words after the drama of having to endure four extra play-off holes for the young Queenslander and Swede Jonas Blixt to secure victory in the Zurich Classic Monday morning local time in New Orleans.

Smith, 23, joined Blixt in securing a two-year Tour exemption and more immediately a start in next week’s Players Championship just a short drive from Jacksonville in Florida where Smith is now based.

It had been a drama fuelled final day on Sunday with storms creating havoc and forcing a very long delay before the players returned late in the afternoon to the TPC Louisiana course.

Then when it seemed Smith and Blixt would seal victory in regulation play, and this after their all-American opponents in Kevin Kisner and Scott Brown bogeyed the 71st hole, Kisner ensured the first Tour team event since 1981 would go into a play-off when he chipped-in for an eagle to tie Smith and Blixt at 27-under par.

However, the fading light meant no chance of continuing with a play-off.

Monday dawned with hardly a cloud in the sky which was in stark contrast to Sunday but the fireworks of a day earlier were missing as the two teams parred the first three extra holes. 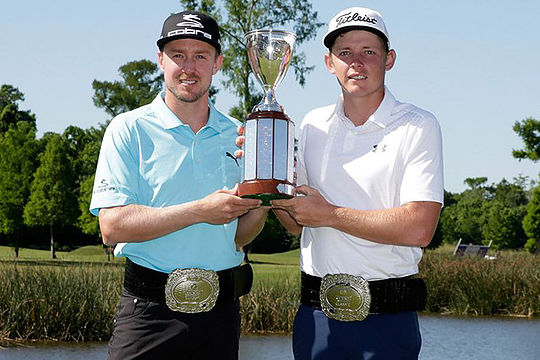 At the fourth extra hole Smith put his third shot into the 18th and inside the three others just three foot from the pin.

The Brisbane-born Smith calmly knocked in the birdie putt and while it was Blixt’s fourth Tour win the young Aussie was overcome by the occasion and had to be comforted by Blixt.

It was not until after the trophy presentation that the enormity of the achievement began to resonate with Smith.

“I’ve been playing well for a while now the last few months and everything needed to come together to get a relaxed week I think with Jonas,” he said.

“Really freed me up and freed Jonas up, as well, I think. Yeah, and we both played out of our skin. It was really good.”

“But I have to say last night was actually better for me than the night before. Saturday night, I struggled to sleep, tossing and turning, and then last night, I think because we had such a long day, I just kind of went home and knocked out.”

“Yeah, but sorry to bring you all back, by the way, on Monday (smiling)”.

Those in his homeland knew of Smith’s capabilities as he had captured the 2011 Australian Amateur Stroke-Play Championship in 2011 and 2012 and a year later won the Australian Amateur crown alongside numerous other amateur titles including the QLD Amateur, Gary Player Championship, the Greg Norman Junior Masters and the Boy’s Victorian Masters.

It was three years later at Chambers Bay when Smith burst onto the world stage finishing fourth in his first appearance behind Jordan Spieth in the 2015 US Open.

Now in his 53rd Tour event Smith has become the newest Australian to win on the PGA Tour and the third this 2016-17 season after fellow Queenslander Rod Pampling won the Shriners Hospital Open and Marc Leishman secured victory in the Arnold Palmer Invitational.

“I was nervous standing over that final putt but and I tried not to show it to Jonas, but yeah, like we’ve been saying, I felt like, you know, one of us was going to pull it off, you know what I mean, all week,” said Smith.

“So, I have really started working hard on that again this year, and yeah, to hit a shot like that under the pump, especially when you know you’ve got it, was pretty cool.”

And after winning the first regular Tour team event in 28 years Smith already has his eye on securing a place in the International Presidents Cup team.

“The Presidents Cup was definitely a goal of mine at the start of the year to play,” he said.

“There’s always a couple or a few Australians that play, as well. Yeah, it would be an awesome experience I think to go and play that one, and hopefully I’ve showed enough this week and in weeks to come to get on the team.”

On top of a tee time at TPC Sawgrass next week Smith also is exempt into the Tournament of Champions at the start of 2018.

However, the only real disappointment is that Augusta National, unlike every other event did not recognise the team format of the Zurich Classic and as such, there was no automatic invitation into the Masters.

Along with the lack of a Masters invite, the new format also didn’t include any world rankings points so Smith bizarrely dropped from 112th to 114th despite his amazing win this morning. However, given his current form he is sure to play well enough to qualify for the Masters next year.