Local hero Cameron Smith battled lightning and rain to close out his fifth victory of the year at the Australian PGA Championship at Royal Queensland Golf Club in Brisbane.

It was the third Australian PGA title for the World No.3 following back-to-back victories in 2017 and 2018 at the Gold Coast’s Royal Pines Resort.

It wasn’t all easy though. Entering the final day with a three-shot lead, Smith struggled with his game and fought hard to keep Jason Scrivener and Japan’s Ryo Hisatsune at bay.

Things looked grim for the 29-year-old when he returned from an almost two hour break in play due to storms and immediately bogeyed the 11th hole to fall into a three-way tie on 11-under.

However, at the very next hole Smith showed why he’s one the hottest golfers on the planet, pulling off a spectacular shot from the left rough over a group of trees to leave himself with a short birdie putt for the outright lead. 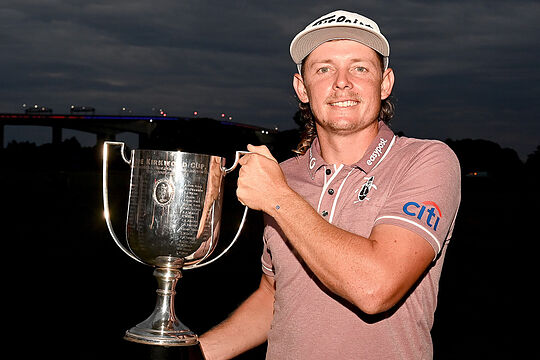 No doubt buoyed by his stellar play, another two birdies came quickly at the 13th and 16th holes to take his lead to three with DP World Tour regular Jason Scrivener ending his chances with a heartbreaking double-bogey at par-3 17th.

Smith sailed home with back-to-back pars to claim a three-shot victory on 14-under over with Jason Scrivener and Ryo Hisatsune sharing second place on 11-under after Scrivener birdied the final hole.

“You kind of get the mojo and for it to be stopped not once, but twice, is a little bit frustrating,” said Smith of the weather delays that plagued the afternoon field.

“When we went in for that second time, I think I was just really tired. I came in, had a coffee, tried to get some energy back in me and went out there and played really solid the last seven or eight holes.”

“It was kind of nice to know that I can do that with not much in the tank.”

Fresh off a 12th place at the DP World Tour Championship, Min Woo Lee didn’t disappoint. The Western Australian star racked up a share of 4th place on 9-under alongside England’s John Parry and looks set for a sold showing at next week’s Australian Open in Melbourne.

The Australian Open begins Thursday and marks Smith’s last tournament of the year and one title that he would dearly like to add to his trophy cabinet.