The lead changed hands throughout the afternoon at Green Eagle Golf Courses in Hamburg as Levy and overnight leader Smith were engaged in an exciting final-round battle. 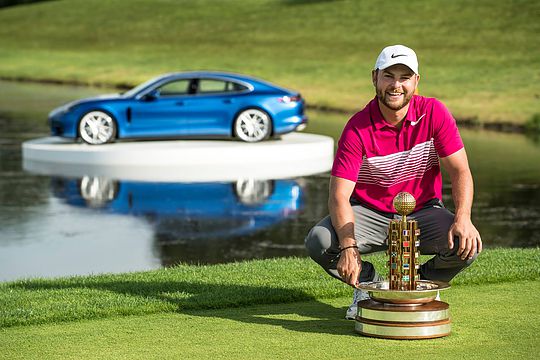 Levy led by a single shot as he stood at the 18th tee, but when playing partner Smith holed his ten foot birdie putt to get to 13 under and join the Frenchman at the summit, he was forced to tap in his tricky par putt to force a play-off.

Both players reached the putting surface in two at the first extra hole but Levy was in the box seat after sending his eagle putt to within three feet, with Smith another 12 feet away from the hole.

After the Englishman missed his tricky putt, Levy had the chance to finish the contest but he missed his close-range birdie effort – so the pair headed back to the 18th tee.

And after sending his monster eagle putt to within three feet of the hole, Smith tapped in his close-range birdie effort to secure his first victory in his 25th event.

Smith, who won the HotelPlanner.com PGA EuroPro Tour Order of Merit in 2015 before adding the Road to Oman title to his CV last year, said: “I’ve loved it. It’s been nerve-wracking at times but I’ve really enjoyed it.”

Starting his round two hours later than scheduled after play was suspended due to the threat of lightning on Sunday morning, Smith extended his advantage to three strokes when he rolled in his six-foot birdie putt at the first to move to 13 under par.

But Frenchman Levy, who saw off Ross Fisher at the second play-off hole to win this event last year, holed his bunker shot at the short second to cut Smith’s lead back to two shots.

And when Smith dropped his first shot of the day after sending his approach to the edge of the water hazard at the sixth, Levy holed his par putt to reduce the deficit to one.

Levy just missed his birdie putt at the seventh but made amends at the next, rolling in from four feet to get to 12 under and join Smith at the summit.

But when Smith missed his par putt at the same hole, Levy found himself in possession of the outright lead.

Levy had to take a drop after getting into trouble off the tenth tee and did well to escape with just a bogey, but that dropped him back into a share of the lead.

And Smith took advantage, holing his three-foot birdie putt at the next to jump to the top of the leaderboard.

However, the Englishman left his bunker shot at the 13th well short of the hole and failed to convert his 20-foot par putt.

Levy and Smith both made birdies from inside ten feet at the 15th to get to 12 under before Levy reclaimed the outright lead with another gain at the 16th.

But Smith got up and down from the rough behind the green for a birdie at the last to take it to extra holes.

And after watching Levy miss his close-range putt at the first play-off hole, Smith tapped in from a similar distance to win the tournament.

Australia’s Ryan McCarthy posted his best European Tour result despite a roller-coaster ride across his final nine holes on Sunday.

McCarthy was well in contention as he teed off on in the final round however a pair of double bogeys and a bogey saw him close the tournament with a 75 and a share of 19th place at 6-under.

Dimi Papadatos was the only other Aussie to make the cut this week and finished in a tie for 60th at 1-over.