Cameron Smith hasn’t failed too many times in his career but his latest attempt at breaking the Guinness World Record title for the Largest Golf Lesson didn’t work out this time.

The World No.3 was back in Australia for the first time in three years and along with his long-time coach Grant Field, the pair guided a large crowd through a 30 minute golf lesson on the range at the historic Royal Queensland Golf Club in Brisbane. 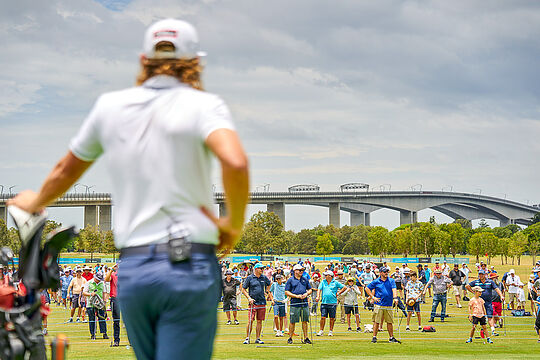 “What an amazing experience this morning and equally warm welcome home for the first time in three years,” said Smith.

“I’m blown away with the turn out from both fans and golfers alike – a huge thank you to everyone who came out for the lesson, I’ve had a ball being involved.”

“It’s great to be home, and this was a perfect way to kick off a big week and now I can’t wait for the Fortinet Australian PGA Championship to start on Thursday.”

Unfortunately the attempt fell well short of the current title holder, the Mayakoba Golf Classic, who managed to gather 1,073 participants at the El Camaleón Golf Course in January 2011.

Still, Smith has enjoyed a superb year, winning the the Players Championship at TPC Sawgrass in March and his first major title at the 150th Open Championship in July along with his LIV Golf title in Chicago.

Smith will tee off at the Australian PGA Championship this Thursday (Nov 24).