Cameron Smith has recorded his best finish this season in the US with a 4th place at the Porter Cup in Lewiston, New York. 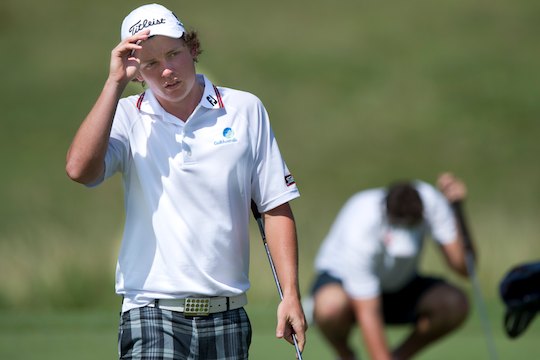 Cameron Smith recorded his best finish this season in the US with a 4th place finish at the Porter Cup in Lewiston, New York (Photo: Anthony Powter)

Werenski claimed his first top amateur US title with rounds of 66-62-67-68, for a two stroke win over fellow countryman, Denny McCarthy.

This is a stellar result for Stieger, who headed to the US with fine performances in the UK, making the cut in every event he entered, including a quarter-final appearance in the British Amateur at Royal Troon.

Ryan McCarthy finished a stroke behind Stieger at 8-under-par with rounds of 71-69-65-67 to record a fine top-10 result finishing in a tie for 7th position.

Nathan Holman, who showed early promise at this event after finishing the opening round in a share of 4th position, fired a final round 69 to finish at 2-under-par and in a tie for 23rd. Holman’s third round 74 damaging his chances after opening rounds of 66-69.

Jake Higginbottom, our highest world ranked amateur, fired rounds of 73-71-66-79 to finish in a tie for 27th position.

Higginbottom’s overall result this week was a little disappointing and he will be looking to improve on recent performances particularly with the two big events – the Western Amateur in a fortnight in Chicago and the US Amateur next month – on his schedule.