Like Phil Mickelson before him, there was a period of time when Dustin Johnson was looked on as a player who should be winning majors, but never seemed to be able to get over the line.

All that changed with his US Open win in 2016 and his ascendancy to World No.1 in 2017 and now ‘DJ’ has topped all that off with a record-setting five-shot win at the US Masters.

Johnson saw off challenges from Australia’s Cameron Smith and Sung-jae Im to card the lowest ever Masters winning score of 20-under, breaking the 18-under record set by Tiger Woods in 1997, when he famously won by 12 strokes and then again by Jordan Spieth in 2015.

Despite the end result, it wasn’t an easy ride. Johnson came into the final round with a four-shot buffer but by the fifth hole, South Korea’s Im had reduced the deficit to just one before Cameron Smith also applied his own pressure coming to within two strokes of the lead with just nine holes to play. 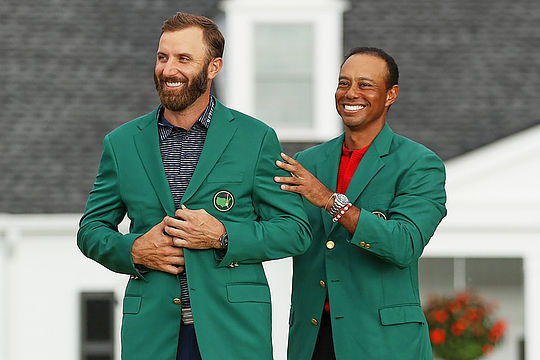 While Johnson admitted afterwards that the nerves were kicking in, he didn’t let it show on course, firing off birdies at the 13th, 14th and 15th holes to set up his record-breaking tally and snatch any hope from those playing ahead of him.

“I proved that I can get it done on Sunday with the lead at a major, especially in tough conditions,” said Johnson.

Johnson had previously finished inside the top-10 on eleven occasions in majors including five times as runner-up with three of those coming in the last 18 months. He closed out the 2019 Masters behind Tiger Woods and recorded back-to-back second place finishes at the 2019 and 2020 PGA Championships.

And while it looked like both Smith and Im were soundly beaten, their 15-under totals were actually the lowest ever set at the Masters by a non-winner and would have been a winning score in all but eight events since 1934.

In another non-winning blow for Smith he also set a record in becoming the first player ever to record four rounds in the 60’s at the Masters.

“I struggled with my driver all week but my chipping and putting was the best it has ever been, and that was the difference,” said the Brisbane native.

“I’ll take 15-under here for the rest of my career. If I do that, I might win a couple of Masters.”

Smith’s efforts won’t be forgotten either with Masters runner-ups receiving a silver medallion and their names engraved on the permanent Masters trophy that remains at Augusta National.

World number three Justin Thomas took outright 4th place on 12-under with Rory McIlroy finishing in a tie for 5th place alongside Dylan Frittelli another shot back.

McIlroy had his chances but an opening round of 75 proved too much to overcome and the 31-year-old will be forced to wait another 6 months before he can get that Masters monkey off his back.

Speaking of big-hitters, the hype around Bryson DeChambeau was real heading into Masters week. He’d previously overpowered Winged Foot to win the US Open by six shots and was in fine form. However, as many a player has found out, Augusta National can be cruel.

DeChambeau just couldn’t get his game on track on his way to recording 11 bogeys, 2 double-bogeys and a triple bogey for a share of 34th place and one shot behind 63-year-old two-Masters champion, Bernhard Langer.

“I had some weird things happen to me I just couldn’t foresee. I’ve got to fix this dizziness or whatever is going on. I’ve got to get healthy first and foremost,” said DeChambeau.

And let’s not forget defending champion, Tiger Woods, who look set to contend again this year following an opening round 68 before rounds of 71, 72 and 76 put an end to that fairytale.

Woods’s Sunday 76 could easily look like a bloodbath from the outside but the truth is he actually birdied five of his last 6 holes in what could have been a Tiger-esque comeback of epic proportions…had he been in contention.

So what sparked that string of revenge birdies? Well, it’s hard to believe but Woods spun not one but three straight balls back into the water at the par-3 12th hole known as Golden Bell. He walked away with a 7-over septuple 10 to record his first-ever double-digit score on any hole in 24 years as a professional.

Marc Leishman lead the way for the Aussies behind Smith, managing to repair his week with a final round 4-under 68 to move into a share of 13th place at 13-under. Unfortunately 2013 champion Adam Scott couldn’t get much going the entire week and fell away with a Sunday 73 but was still able to secure 34th place at 2-under.

Jason Day and Lukas Michel both missed the cut.

No matter what you think of Dustin Johnson as a person, there’s no denying his golfing career – 104 weeks as World No.1, 24 PGA Tour titles, two major titles and over US$70 million in prize money.

And at 36-years-old he is playing the best golf of his career and that should be a concern for anyone looking to knock him off his World No.1 perch any time soon.