Cameron Smith & Minjee Lee have won a rain delayed 2010 Greg Norman Junior Masters. Play was halted 2:00pm local time as a severe electrical storm rolled through the Coolangatta Tweed Golf Course during the final round. The lead groups had five holes to play once players made their way back out onto the course. 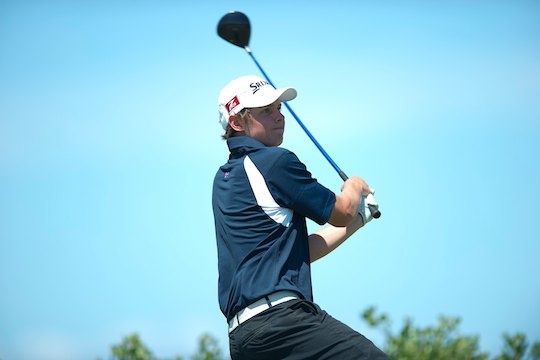 Minjee Lee (Royal Fremantle) carded rounds of 74, 69, 68 & 75 – 286 (-6) to edge out the 2009 Champion Annie Choi by a single stroke to be crowed this year’s Girls Champion. At just fourteen years of age Minjee was able to remain focused with many older competitors closing in during the final round. Annie Choi made considerable ground during the final round after firing a 71 (-2) but was unable to edge out Minjee. Annie finished with consistent scores of 74,71,71, & 71- 287 (-5).

The week was met with surprise for twelve year old youngster Chris Park (Emerald Lakes) ,hitting the headlines yesterday after producing a hole-in-one at the same hole two days in a row.

The Coolangatta Tweed Golf Club was presented in magnificent condition over the past four days, credit must go to Superintendent Peter Lonergan and his team for presenting the course in top condition for the 2010 Greg Norman Junior Masters.