Just as most in Australia were enjoying the Anzac Day long weekend and honouring those who had made the ultimate sacrifice, Cameron Smith and Marc Leishman managed to overcome two of South Africa’s best to win the Zurich Classic on the first-hole of a sudden-death playoff.

The win was Smith’s second in New Orleans and his third PGA Tour title while Leishman’s tally now moves to six. Smith also secures a handy third place on the FedExCup leaderboard with his second win and sixth top-10 of the season following victory at the Sony Open earlier this year.

The Australian team came into the final round a shot behind Louis Oosthuizen and Charl Schwartzel, who couldn’t replicate the magic from their previous day’s 63 and ended the round with a 71 for a two-way tie at 20-under alongside the Aussies to force the playoff.

Unfortunately for the South Africans, Oosthuizen’s drive quickly found the bottom of a lake at the par-5 18th and when his 4-metre par attempt failed to find the bottom of the hole, it was game over for the major-winning pair.

Despite the team format, Leishman was quick to give most of the credit to his playing partner.

“Cam played unbelievably well. I was saying to him when we finished if that had been an individual tournament, I think he would have won by a fair few shots. But I managed to not hold him back too much.“

“It was a fun week. I mean, the course was unbelievable. Obviously, New Orleans is a great city and we enjoyed our time here and looking forward to coming back next year I’m sure.” 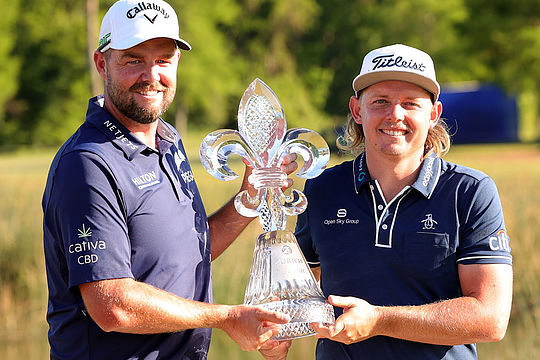 Both players were also asked about the significance of their Anzac Day victory.

“That’s pretty special. I was actually speaking to my old man last night and he said it’s a really good omen for us guys being up the top of the leaderboard on Anzac Day. I know my family went out to a dawn service yesterday morning and paid their respects, so maybe we have got a bit of good karma out there today because of that.“

“Obviously we had three Aussies in our little crew and my caddie Pinner is a New Zealander, so the Anzac spirit definitely held up today.”

Peter Uihlein and Richy Werenski carded a final round 67 to move from 18th to outright third. Uihlein, who is currently playing on the Korn Ferry Tour, was coming off the back of his first win in four years at last week’s MGM Resorts Championship.

Cameron Percy and Greg Chalmers were the only other Aussie pair to make the cut but finished in last place following a final round blowout of 82.

Teams Matt Jones/J.J. Spaun, Aaron Baddeley/Roger Sloan and Rhein Gibson/Ben Taylor all failed to make it through to the weekend.

The PGA Tour returns to normal programming this Thursday with the $6.9 million Valspar Championship in Florida where Paul Casey will defend his title from 2019, which he won by a shot over Zurich Classic runner-up Louis Oosthuizen and Jason Kokrak.