Cameron Smith proved why he’s one of our major talents securing his quarter-final berth at the Australian Amateur Championship being held at the Commonwealth Golf Club in Melbourne.

Trailing early against Anthony Murdaca, a solid recovery over the back nine secured Smith a solid 2&1 win. 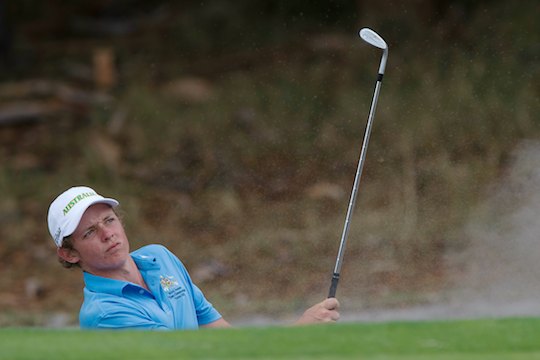 Cameron Smith escapes from a greenside bunker during the third round of the Australian Amateur (Photo: Anthony Powter)

Smith will encounter England’s Neil Raymond in tomorrow’s quarter-final after Raymond accounted for Queensland’s Sam Daley on the 20th.

Geoff Drakeford continues to play stellar golf around his Melbourne base defeating Anthony Houston in the morning’s second round, 4&3, before disposing of talented New Zealander and former Australian Junior Amateur champion, Tyler Hodge, 4&2. 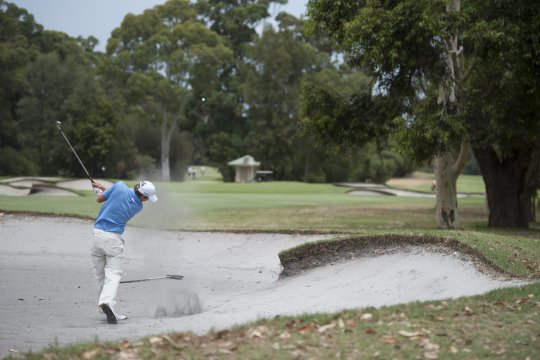 Cameron Smith explodes from the 4th fairway trap at Commonwealth during the 3rd round of the Australian Amateur Championship (Photo: Anthony Powter)

With a number of early exists by marque players, including Brett Drewitt’s second round loss to Dale Brandt-Richards, 2-up, and Viraat Badhwar’s defeat at the hands of Anthony Murdaca, 1-up, this Australian Amateur Championship is potentially shaping up to be a Smith & Drakeford final.

Drakeford will need to account for Perry and the winner of the Sam An and Dale Brandt-Richards match to progress to Sunday’s 36-hole finale.

Brandt-Richards has been a surprise package at these championships.

Qualifying the 20th seed, Brandt-Richards’ morning win over Drewitt was impressive, as was his 3&1 defeat of Aaron Wilkin.

I rate Brandt-Richards as a ‘sleeper’ in this championship and if he accounts for New Zealand’s Sam An, he certainly has the potential to move in this event.

The lower half sees another New Zealander, Blair Riordan, against Damien Jordan, after Jordan accounted for Dale Williamson, 6&5, and Riordan disposed of Michael Dennis on the 20th.

As with all of these major championships, the cream rises to the top and in Smith’s case he certainly must be confident with his progression into the weekend. He is one of the few name players left standing in these championships.

The world number 37 has claimed the Australian Amateur medallist honours twice, yet the main title has so far eluded Smith’s grasp.

It would be timely for the Queenslander to win our national title to cap off a superb amateur career.

However, Drakeford looks dangerous on his Melbourne ‘home’ at Commonwealth, a superb layout which includes a number of tight par 4 doglegs demanding precision from the tee.

Many a top player has fallen victim to this new wave of talent that we are seeing this week at Commonwealth.

Ryan Ruffels, at just 15-years-old can hold his head high and he is a talent to monitor as is Anthony Murdaca.

With the likes of Brady Watt, Brett Drewitt and Todd Sinnott already out, this Australian Amateur Championship is unfolding into one of the most intriguing championships for some time.