Cameron Smith is the 150th Open champion after pulling off an incredible string of birdies over the final nine holes to finish at 20-under to equal the most under par in a major championship and to win by a stroke over American Cameron Young.

Smith fired rounds of 67-64-73-64 with much credit going to his putter which was red hot come Sunday. Twenty-nine putts was all he needed in the final round, flipping the switch from Saturday’s horror round of 73.

The World No.6, who started four shots back of the leaders, was steady in the opening nine holes grabbing two birdies at the 2nd and 5th holes before turning up the heat at the 10th with a run of five straight birdies to chase down Viktor Hovland and McIlroy and move into a tie for the lead by the 13th alongside McIIroy.

And then at the world famous 17th hole, it looked like coming all undone when Smith’s approach came up short. McIlroy was one behind Smith at the time and if there was ever a need to pull off an up-and-down, Smith delivered it. 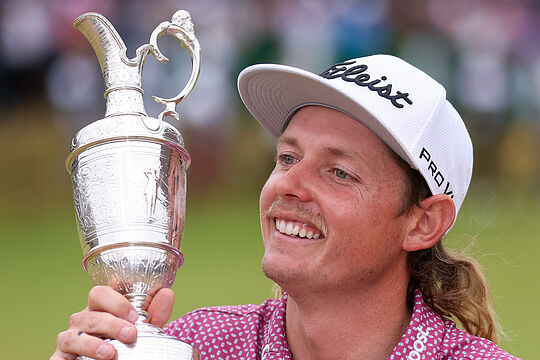 Earlier his tee shot safely found the fairway, but as with the nature of this world famous hole, the second shot is the one you need to nail but Smith pulled his approach to finish short and left and a metre from the road hole bunker. A place you do not want to be.

The Queenslander then delivered the perfect up and down, putting off the green surrounds to finish two metres from the cup, before nailing the putt to remain one shot in front heading to the last. And he would need it.

Namesake Cameron Young, Smith’s playing partner, eagled the 18th after driving the green to fire a 65 to finish at 19-under-par, meaning Smith needed a birdie for the win. The 28-year-old calmly nailed his putt for a second 64 of the week and the win.

“It’s just unreal, to win this and win it here, at St. Andrews, is pretty special,” said an emotional Smith. “This place is just so cool and to get the win is something I just dream of.”

“I think just in general, all the names on there, every player that’s been at the top of their game has won this championship. It’s pretty cool to be on there. It really hasn’t sunk in yet. I don’t think it will for a few weeks…it’s just unreal.”

Still in search of his first major in eight years, McIlroy would finish with a 2-under 70 for a share of third and his fifth top-5 at The Open.

“This one is for Oz!,” were Smith’s final words after receiving the Claret Jug on the 18th green.

Eleven different Australians have won a major and now Smith has joined this elite club and breaks a 29-year drought for Australians at the Open championship. But it wasn’t just any Open Championship. Smith was able to secure victory in the 150th anniversary playing of the world’s oldest major and do it at the Home Of Golf; it doesn’t get much better than that.

Kel Nagle (1960) and Peter Thompson (1955) are the only other Aussies to win The Open at St Andrews, a championship which Australians have now won ten times with Smith’s victory.

Smith now joins Thomson, Nagle, who won the 100th Open, and fellow Queenslanders Greg Norman and Ian Baker-Finch as the only Aussies to be crowned the Champion Golfer of the Year. The World No.6 was also runner-up at the 2020 Masters and finished third at this year’s Masters along with victories at the Players Championship and Sentry Tournament of Champions earlier this year.

A final round 67 saw Lucas Herbert and Anthony Quayle share 15th place alongside Adam Scott as the next best Aussies at St Andrews. Scott had earlier looked a contender with a second round 65, however rounds of 70 and 71 across the weekend saw his hopes fade.

Matthew Griffin, Marc Leishman, Dimitrios Papadatos and Jediah Morgan all had the weekend off.