Cameron Smith fired a 7-under-par third round 63 at the Porter Cup to move in to 5th place, six behind leader American Richy Werenski.

After opening with rounds of 71-67, Smith’s peerless third round at the Niagara Falls Country Club elevated the 2011 Australian Stroke champion seventeen places up the leaderboard for his best performance to date in the US. 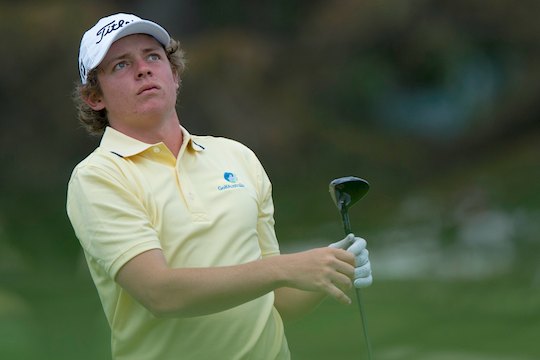 Cameron Smith fired a 7-under-par 63 at the Porter Cup to be in a tie for 5th, six behind American Richy Werenski (Photo: Anthony Powter)

Ryan McCarthy was another third round mover firing 5-under-par 65 to jump twenty-five places in to equal 12th at 5-under-par, along with Matt Stieger, who has carded rounds of 67-69-69.

Nathan Holman, who opened with a 66 to be share of 4th position after the first round, has slipped back to a tie for 25th position following rounds of 69-74 to be at 1-under-par.

Holman is a stroke ahead of Brett Drewitt, Oliver Goss and Jake Higginbottom, the three Aussies all at even-par for the tournament.

Australians have experienced mixed success at the Porter Cup with Simon Nash back in 2002 the only Aussie to hold the prized trophy.

European Tour players, Andrew Dodt and Andrew Tampion, recorded top-10 finishes in 2007 and 2006 respectively, while Matthew Griffin in 2008 finished in a tie for 13th position.

Last year heading into the final day Tim Hart and Tarquin MacManus were in a tie for 3rd at 8-under-par, just three behind the third round leader, American Paul Haley.

The Australian duo would go onto fire closing rounds of 1-over-par, 71, on a day where low scoring dominated the field.

The Aussies closed the tournament in a tie for 15th, five short of Americans Patrick Rodgers and Wesley Bryan, who finished at 12-under-par to force a play-off for the title with Rodgers claiming the title.