Smith vows to keep mullet despite pleas from ‘missus’

When did the subject of a pro golfer’s hairstyle gain so much attention?

Aussie Cameron Smith has been a walking headline of late on the PGA Tour and though he did win the Sony Open earlier this year, since then the focus has been mostly on his hair. 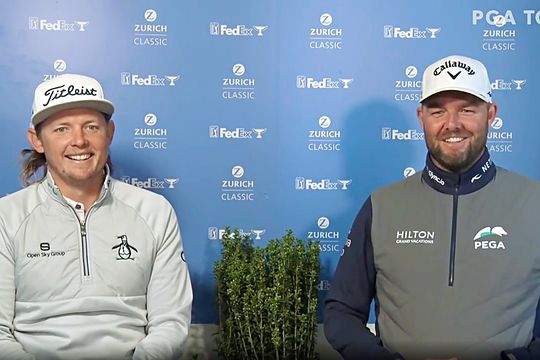 More precisely, his ‘mullet’ hairstyle. And it’s become so popular that he’s even going so far as to defy ‘the missus’ and not get his golden locks trimmed.

The 27-year-old Smith has been sporting a ‘mullet’ since late last year with the hairstyle clearly now enjoying its own fan base. There was even a tweet last week showing what Rory McIlroy, Brooks Koepka, Bryson DeChambeau and Jordan Spieth would look like sporting a ‘mullet’.

According to the Oxford English Dictionary, use of the term mullet to describe this hairstyle was “apparently coined, and certainly popularised, by American hip-hop group the Beastie Boys”, who used ‘mullet’ and ‘mullet head’ as epithets in their 1994 song “Mullet Head”.

They expounded on the subject at length in a six-page article entitled “Mulling Over The Mullet” in Issue 2 (1995) of their magazine Grand Royal, offering a selection of alternative names for the cut, including “Hockey Player Haircut” and “Soccer Rocker”.

Basically, a mullet hairstyle is short on top and then long at the back or as it’s more colloquially known “business at the front, party at the back.”

David Bowie sported a ‘mullet’ hairstyle back at the height of his singing career in the 70s and now Smith is sporting a ‘mullet’ as the reigning Sony Open champion and despite pressure on the home front, the Queensland-born golfer is not that keen on visiting the barber shop for a short-back-and-sides.

“I don’t know when I will get it cut,” he said ahead of teaming up with fellow Aussie Marc Leishman in this week’s Zurich Classic of New Orleans team event at TPC Louisiana.

“I told the missus that I would cut it if I won, but I don’t know, I mean everyone loves it.”

“I’ve got a lot of attention, I guess, a lot of support out on the golf course with it, so I don’t know, might hang around for longer than I anticipated, but I don’t know, I think it’s a good thing, just something different.”

“Everyone has a laugh. I know “Leish” has a laugh at it and he picks on me sometimes about it, but no, it’s good. I love it.”

There will be even more laughs on day one of the $7.4m Zurich Classic as Leishman chose ‘The Mullet Song’ as the duo’s walk-up song in making their way to the opening tee.

“It’s actually funny, Leish found this song or looked up a song and he’s already entered it I didn’t even get a choice. It’s called The Mullet Song. So we’re going to be rocking that going to the first tee. And maybe a few other surprises. So it will be good,” said Smith.

‘The Mullet Song’ is sung by Jay Powell and the opening two lines to the song definitely sum-up Smith’s ‘mullet’ hair cut: “Business in the front, party in the back.”

And that’s what the Aussie duo will be looking to do this week in New Orleans with Sunday’s final round a very poignant day in the Australian and New Zealand calendar being April 25th – ANZAC Day.

It’s the day in 1915 when Australian and New Zealand troops landed ashore on the ill-fated Gallipoli shoreline in Turkey.