Cameron Smith and Geoff Drakeford will battle for the 2013 Australian Amateur championship title in tomorrow’s 36-hole final at Commonwealth Golf Club in Melbourne.

Smith progressed to his first national final with a 3&2 victory over New Zealand’s Blair Riordan after being tested in the morning’s quarter-final by England’s Neil Raymond. 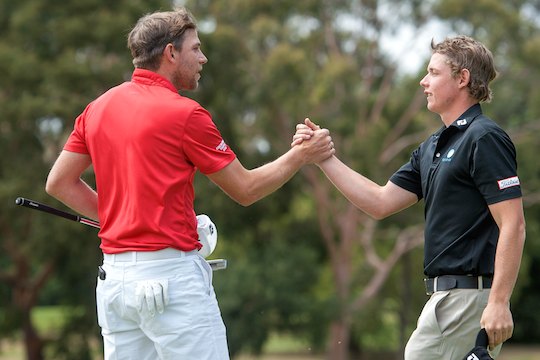 Leading 2-up with three to play Raymond went down fighting against Smith forcing the Australian to make a delicate up-and-down on the 17th to secure victory.

“It was a tough match,” said Smith.

“I probably had a tougher one in the opening round against Craig Hinton, yet it is great to be in this position going towards our national title.” 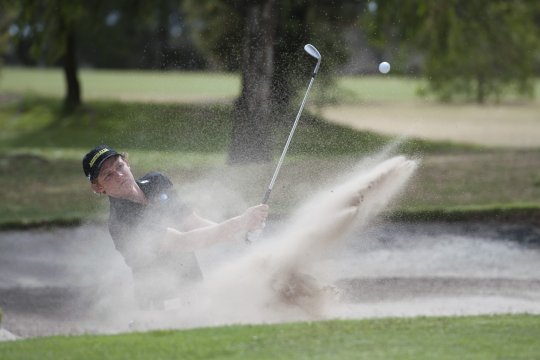 Cameron Smith escapes from the 8th greenside bunker during the quarter-final round of the Australian Amateur Championship (Photo: Anthony Powter)

With the final an all-Aussie affair, Smith knows he’ll have to be on his game to overcome Drakeford who holds the amateur course record at Commonwealth with a 65 during a club championship round in 2009.

“Geoff obviously knows this layout better than anyone having played pennant golf here. Yet I’ll be playing to my game plan trying to hit in lots of wedges.”

“My game is strong and I’m confident I can get up-and-down when I need to. It should be a great match.”

Drakeford progressed to the final with a morning 1-up win over Muswellbrook local Dylan Perry, who had former Australian Amateur champion and Japan Tour player, Kurt Barnes on his bag.

Perry pushed Drakeford all the way to the 18th, with Drakeford making a stellar bunker save to secure the win.

“It was great to get away with that win,” said Drakeford who then went onto secure a 6&4 win over New Zealand’s Sam An.

“My swing is in good shape and I’m keeping concentration out there. I’m minimising any mistakes and hopefully I can keep this going tomorrow.”

The Smith against Drakeford final promises to be a corker.

Despite not having played each other in match-play before both know each others game well.

“I know Geoff will bomb a few out there and play aggressive, that’s his style,” says Smith.

“Sure he will get it close on the shorter par-4′s, you have to expect that, but my short game is good and I’m confident up close.”

Local knowledge will certainly give Drakeford the upper edge in tomorrow’s final. Yet anything can happen in match-play and with our national title up for the taking, the men’s final certainly will be hard fought.

In the ladies final, Minjee Lee will face Jenny Lee with MinJee Lee making her second final appearance at these championships.

Jenny Lee defeated Kiwi Julianne Alvarez in the quarter-final before beating Hannah Green 2&1 in the afternoon to advance to the final.